The other part of the Bank for International Settlement's Triennial report on activity in the financial markets concerns turnover in Interest Rate Derivattives. You can download the main report yourself here, and the numbers are all provided in an Excel file that you can download here.

This table provides the key figures 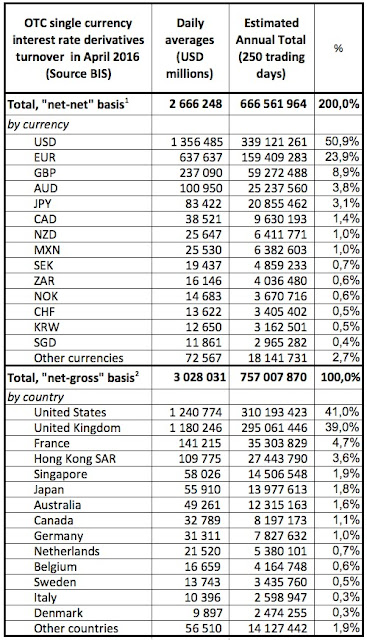 Of course, I would never wish to suggest that all this frenetic activity is not incredibly important for the functioning of the world economy. I will note, however, that none of this is taxed at all. When I buy things, I nearly always have to pay Value Added Tax. And yet when the traders do all their interest rate swaps, they pay nothing. I suppose that makes sense in that even the traders will presumably accept that their activity adds no Value at all, and so the absence of VAT is natural.

But, as you may be aware, I have been arguing for about 6 years that we could have a much simpler system if we replaced the vast majority of taxes by a flat rate financial transaction tax on all electronic trading - including everything that you and I do to, of course.

The trick is that the tax should not just benefit the government in the place where the trading is supposed to occur. As you can see from this table, if you did that, the US would get 41% of the revenue, and the UK 39%. Since US dollars are the base for 50.9% of the trading, 41% is not so far off being proportional. But the fact that 39% of the trading takes place in the UK, despite the fact that Sterling only accounts for 8.9% of the total, means that it would be quite ridiculous to allow the UK government to reap the benefits of such a flat rate FTT. And, as the lobbyists would point out, any attempt by the UK government to impose such as tax would immediately be followed by vast majority of the trading moving somewhere else. And as long as there was a rock somewhere where no FTT applied, the traders would find some way to do their $2.7 trillion of trading somewhere else. In the end, we might find that all the trades were being done on some satellite, or on the moon!

But there's a simple solution. The tax should be applied by the Central Banks. Any trading in a given currency that did not pay the tax to the relevant bank would be illegal, and anyone found attempting to do it would be immediately arrested and locked up. After all, it would be no different to someone doing blackmarket dealing in an attempt to avoid paying VAT or other sales taxes.

Each Central Bank would be free to set whatever tax rate they want. Indeed, if a particular Central Bank wanted to set the tax at 0.0000001% that would be their right.  And I suppose that there may be some obscure advantage of having a rate that was a fraction of the tax levels imposed for other currencies. But the sorts of rates that I am talking about are so low that I really don't think that it would be a big deal.

Imagine what could be done if the European Central Bank was to impose a 0.3% tax on all Euro-denominated Interest Rate Swaps. With $159.4 trillion of trades in a single year, that would genrate a very handy €500 billion in income. Add that to the €1 trillion a year that would be generated by the Foreign Exchange Markets (see yesterday's post), and you can see that this would enormously increase the ECB's power to regulate the amount of money in circulation.

Effectively, Central Banks could have two levers - one to pump money directly into the economy using one of a range of methods that include providing a direct Unconditional Basic Income, and one to remove money from the system via a simple, painless and scrupulously fair Financial Transaction Tax that would be paid by everyone - including you and me. The critical point is that while everyone would be paying the tax, the ridiculous levels of trading in the Foreign Exchange and Interest Rate Swap markets would mean that the bulk of the tax would be paid by the financial markets themselves.

Seems perfectly fair to me.

If you are interested in this idea, you might like to watch the talk that I gave at the Toulouse School of Economics in February 2015, and which includes a discussion of the two levers that Central Banks could use to regulate the amount of money in circulation.
Posted by Simon Thorpe at 09:21