I've been suggesting to both David Cameron and the future leaders of the UK Labour party that they should seriously consider replacing much if not all of the current tax system with a simple tax on all financial transactions. I've argued that the level of such transactions is currently running at about £2 quadrillion a year in the UK - roughly 4000 times total tax revenue.

There's a bit of guesswork there, because no-one (except me!) seems to think that it is useful to add all the numbers up.

It's a problem that I have been trying to tackle for some time. My very first estimates were based on the data provided by the Bank for International Settlements, which documented total transactions in the UK of  £1152 trillion for 2008. I immediately noticed that there were going to be problems, because from 2010, BIS failed to include figures for one of the UKs biggest players - LCH.Clearnet Ltd - which had handled nearly £863 trillion  of transactions in 2008, but had disappeared off the map by 2010 (and has remained invisible to BIS ever since).

Since then, I have been trying to compile my own numbers, using sources that I found on the web. I thus published an estimate of £1760 trillion a year back in feburary 2012,  and in March 2014, I argued that the number was probably at least £1840 trillion.

So, what's the story today? Can I justify the £2 quadrillion figure?

Well, one of the big players in the foreign exchange markets in CLS. Their 2014 annual report, which you can download here, boasts on page 13 that :


"Throughout 2014, we settled a record average daily value of USD 5.1 trillion, up over 2% from 2013. On 17 December, we surpassed both our value and volume recordds, settling USD 10.7 trillion on ticket volumes of 2.1 million"

Assuming 250 trading days a year, thats already a handy $1275 trillion - around  £800 trillion. The problem is that CLS is a "global" organisation, working in many different countries, but nevertheless with a big presence in the City of London. Indeed, the BIS's triennial report based on data obtained for the month of April 2013 concluded that "The vast majority of global FX trading in 2013 has occurred via the intermediation ofdealers’ sales desks in five jurisdictions: the United Kingdom (41%), the United States (19%), Singapore (5.7%), Japan (5.6%) and Hong Kong SAR (4.1%)."

I note that the $5.1 trillion a day reported by CLS in 2014 is almost as large as the $5.3 trillion total reported in the BIS report.

I had already calculated that LCH.Clearnet Ltd's SwapClear system had handled a total of over $640 trillion in various types of Swaps in 2014. That's  over £400 trillion. The LCH.Clearnet site is remarkably detailed, and so it is possible to split that activity as shown in the following tabale.

37% of the $640 trillion was in Overnight Indexed Swaps (OIS), 33% in Forward Rate Agreements (FRA), and just over 28% in Interest Rate Swaps (IRS), with very minor contributions from Basis and Zeroes (whatever they are).

LCH.Clearnet Ltd is also a player in the Foreign Exchange Markets - like CLS. I downloaded a table from their website  that reports monthly volumes over the past two years. This allowed me to calculate that the total for 2014 was a mere  $907,337,943,833.12 - not even a trillion.  Totally dwarfed by CLS who manage the same amount every couple of hours.

After that, we need to add in numbers for players like CHAPS, which (according to their main webpage) handled £68 trillion. They note that "CHAPS turns over the annual UK GDP every 6 working days". They also note that "CHAPS represents 0.5% of UK total payment volumes but 92% of total  sterling payment values (excluding internalised flows within Payment Service Providers)". That's interesting, because it implies that if £68 trillion is just 0.5% of total UK payment volumes, and that therefore the real total is 200 times that much - namely £13.6 quadrillion. Surely, some mistake?

We can add in the figures for the London Stock Exchange, another major player that BIS has not bothered to include in their figures. I downloaded their monthly figures for LSEG electronic order book trading for December 2014 that provides the following table, from which I calculated that the total value for all the different elements was £67.5 trillion. Interestingly, actual share trading only makes up for just over £1 trillion of that. 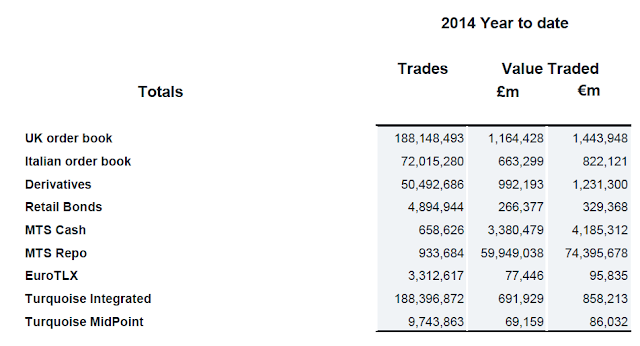 Some other numbers can be found in the BIS annual reports. However, those don't get published until about September, so I will use the figures for 2013. These include numbers for transacations processed by CREST (£279.75 trillion), ICE Clear Europe (£84.36 trillion).

I have found accurate figures for other payment systems used in the UK on the CHAPS website  where you can download a document with an Annual summary of Payment Systems. Here is an edited version of a table from that document, showing the figures for BACS, CHAPS, Faster Payments and Cheques. 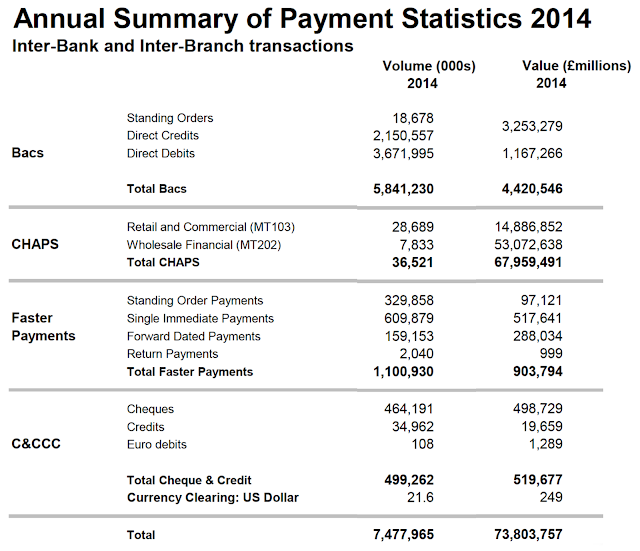 The last big player that I want to mention is an entity that used to be called NYSE Liffe. In 2013 I calculated that they had handled €474 trillion in transactions, roughly £380 trillion.  At the time, they produced wonderfully detailed reports at the end of every trading day, and a very clear summary at the end of each year. Unfortunately, NYSE LIFFE has now disappeared - it has been swallowed up by ICE (Intercontinental Exchange), and since that time you can no longer download the NYSE Liffe annual factbooks.

I've been trying to compile detailed numbers for ICE Europe from their website, but it's proving tricky. You have to download data for each individual day, and there is no "Year to End" column that keeps a running tally. However,  I did manage to download set of figures concerning various types of Credit Products and found that ICE Clear Europe -CDS had handled a total of €2,566,278,963,677 worth of transactions denominated in euros,  together with an additional $118 009 232 426 in dollars.

Fortunately, the World Federation of Exchanges provides some detailed information on their website, and I was able to compile the following numbers for ICE Futures Europe for 2014. 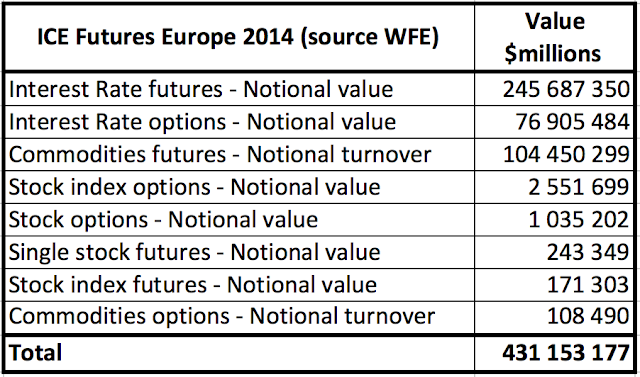 The WFE also provides a number for transactions done by the London Metal Exchange (14.13 trillion dollars).

So, in this final table I provide a summary of what I currently have available. When the values are provided in Euros or Dollars I have converted the numbers into sterling using current rates. 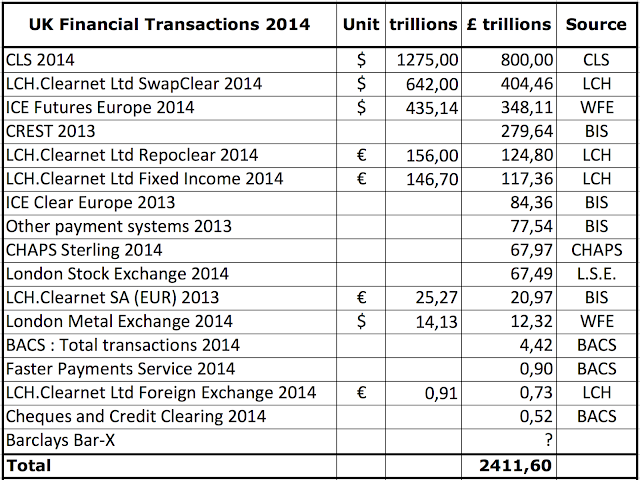 The total comes to over £2400 trillion. Even if we decide that around half of the £800 trillion in foreign exchange handeled by CLS may be done outside the UK,  that still leaves a very healthy £2 quadrillion in transactions. I suppose that some of the activity listed under ICE may turn out to be occuring somewhere else, but it will be virtually impossible to know for sure, unless someone other than me takes the task of compiling realistic figures for the UK seriously.

In the end, as I have argued repeatedly, it looks very likely that the value of UK Financial Transactions really is around 4000 times larger than total UK tax revenue. And that means that an intelligent and responsible government could effectively replace the existing tax system with a minuscule Financial Transaction Tax of around 0.025%.
Posted by Simon Thorpe at 19:00