In april 2013, I published a post in which I compared the total amount of debt in the world economy with the total money supply. That post, called "Total Global Debt and Money Supply : Twice as much debt as there is money" is by far my most popular post, and has been visited well over 6000 times. The numbers I provided gave serious cause for concern, because I calculated that while there was $137 trillion in debt, there was only $68 trillion of money. So, even if you took every single cent there was in existence, you would never be able to pay off all the debt.

Following the two recent reports showing that, since the financial crisis in 2007-8, debt levels had soared even more, I thought it would be interesting to recalculate the total about of money relative to debt. Earlier today, I published a post on the remarkly detailed report from the McKinsey Global Institute that showed that Global debt has now reached a staggering $199 trillion.

What about the Global Money supply? To find out, I have extracted all the numbers provided by a remarkable website called Trading Economics. There you can find tables with Money supply figures corresponding to M0, M1, M2 and M3  for most countries. Unfortunately, the tables are not complete because quite a few countries don't report M3. For example, the Federal Reserve in the US decided not to bother reporting M3 in 2006. But I simply took the largest value for each country, and multiplied the number by the current US dollar exchange rate to calculate each country's money supply in dollars.

The complete dataset is shown in the following table. 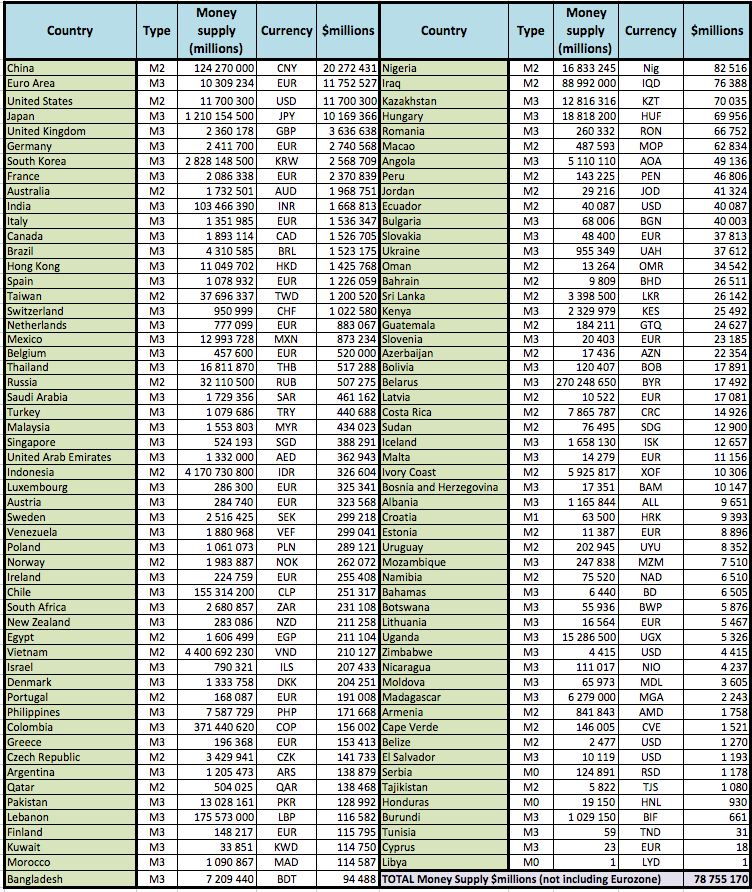 Compared with the numbers that I gave back in 2013, there have been a number of marked changes. For example, the Chinese money supply has soared from $15.7 trillion to $20.2 trillion. The other big players, namely the Eurozone Area, the USA and Japan have stayed fairly stable, but the UK's money supply has increased from $3.19 trillion to over $3.6 trillion.

But the bottom line is that the total money supply for the entire planet now stands at about $78.8 trillion, up from the previous number that I quoted back in april 2013 ($68.3 trillion). The problem is that while this has increased, that increase is completely swamped by the increase in debt.

We are now in the situation where we collectively have $199 trillion of debt, and only $78.8 trillion to pay it off. There is therefore 2.5 times more debt than money!

You surely don't need to be a rocket scientist to see that this situation is completely untenable. Anyone telling us that we can get out of this debt trap by simply being frugal and paying our taxes like good citizens clearly hasn't got a clue.

How on earth did we get into this situation?

For me, the answer is pretty simple. Commercial banks create money when then make loans to individuals, businesses and governments. But when they do this, they create enough money to make the loan, but don't create the money that will be needed to pay the interest. Thus, if a bank creates $1 trillion in loans with interest at 2% and waits for 20 years, the total amount of debt  in the system will have increased to nearly $1.5 trillion. This is what has been happening for centuries, but the effects of that compound interest have now become totally out of control.

It is clearly time for us to change the system. All money should be created interest free. Full stop.
Posted by Simon Thorpe at 17:31