The latest Eurostat figures for Government Debt and Interest payments have just come out.  You can find them on the website and there is a summary document that you can download here. I've compiled the key figures in the following table (updated on the 24th of April to include numbers for the cumulated interest payments). 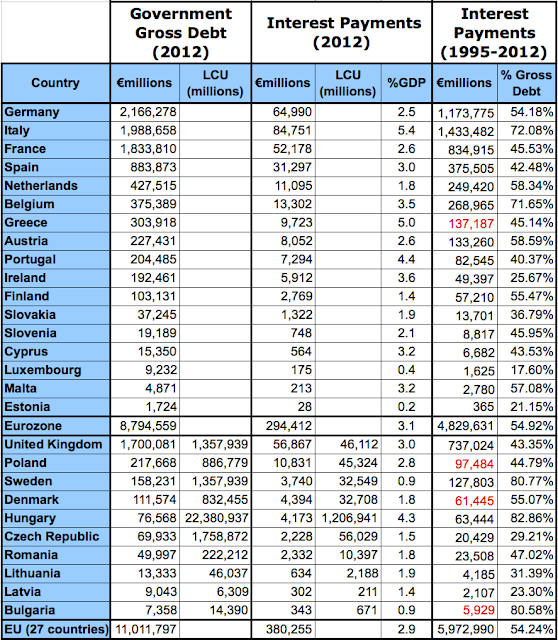 First, total government debt for the 27 countries has now topped €11 trillion, up 5.5% on 2011. For the 17 eurozone countries, the total is now nearly €8.8 trillion (for some reason, the Eurostat data gives a total of €8.6 trillion - not sure why there's a difference). Germany is still easily the most endetted country of them all - its debt levels have increased by nearly 4% since 2011 to €2.17 trillion. Interestingly, Greece has managed to reduce its debt level by around 15%, but Spain's debt level has increased by 20%. The record has to be Estonia, whose debt level has increased by 73%.

Outside the Eurozone, it is interesting to see that the UK's debt level has increased by 9.6%.

The 27 countries paid a total of over €380 billion in interest payments, which means that 2.9% of GDP is lost in paying these fees. For the 17 eurozone countries, the bill for interest payments was €294 billion - about 3% more than in 2011, and amounting to 3.1% of Eurozone GDP.

If we add the total cost of interest payments for the Eurozone for the entire period for which the figures are available  (1995-2012), we get the impressive total of €4.83 trillion, about 55% of all government debt (The numbers in Red mean that the figures are not available for the entire period). French taxpayers have paid out €835 billion and German taxpayers have paid €1,173 billion. But the most generous have been the Italians who have paid out €1,433 billion since 1985.

I won't bother commenting on these numbers just yet. I think they speak for themselves.
Posted by Simon Thorpe at 12:12