Total Global Debt and Money Supply : Twice as much debt as there is money

A week or two back, I raised the question of how it was possible that total debt within the Eurozone (i.e public sector debt and private sector debt combined) could be 2.5 times higher than the total Eurozone money supply. Specifically, the debt at the end of 2011 was €23.78 trillion, whereas the money supply measured by M3 was only €9.76 trillion.

Does this  2.5:1 ratio of total debt to money supply apply outside the Eurozone? Well, to find out, I have compiled data for the 39 countries in the BIS Private Sector Debt database and then added in the numbers for Public Sector (which I got from a very nice World Debt Clock website done by the Economist) to get total debt.

I then used the data on money supply provided by a remarkable site called Trading Economics where you can get money supply data by clicking on each country's link. Money supply numbers are not always standard, but most of the time you can get either M2 or M3. I had to multiply the numbers by the USD exchange rate to get the money supply in dollars.

So, here is the result. 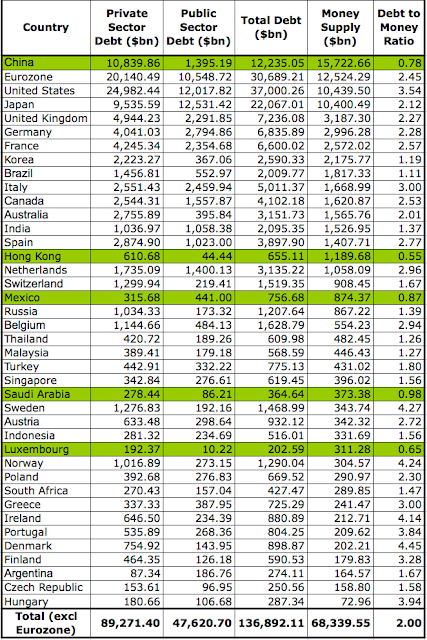 Adding together the money supplies of all the countries together produces a total of $68.34 trillion. That is exactly half the level of debt.

In other words, even if every last cent was added together, we could still only pay off half the debt. In other words, the 2.5:1 ratio of debt to money supply that I noted for the Eurozone is a pretty typical case.

There are only five countries that actually have a money supply large enough to cover their debt (coloured in green in the table). Apparently Mexico is one of them, but this seems extremely odd - maybe an error in there somewhere.

The other four are China, Hong Kong, Saudia Arabia and Luxembourg. That seems to make sense. But even if you combine all their money supply surplusses, you still only get about $18.5 trillion. So, even they are totally unable to help pay off the mountain of debt that the world has amassed.

I find these figures quite incredible. They demonstrate quite clearly that those who have been lending the money that we owe can't possibly have had the money they lent. The whole thing is a complete con.

What's the solution? Well, it seems to me that everyone should agree that we actually effetively need to temporarilly double the world's money supply and use that money to pay back this fictitious debt.  The only place that this can be done is by using the Central Banks to create new debt free money and using that new money to pay off the debt.

Seems like a sensible plan to me.
Posted by Simon Thorpe at 12:40