Continuing with my idea about imposing a universal 1% tax on all assets, I thought I would try and find some numbers on the total value of real estate in the world. I already had a figure of €10 trillion for France. But what about other countries?


It turned out to be remarkably easy to find some numbers. Thanks to Google (!), I found a blog piece called "The 10 most valuable real estate markets in the world" written by Paul Tostevin, Director of World Research at Savills.

I think the simplest thing is to simply quote what he wrote:

China is home to more of the world real estate market assets (by value) than any other country at $42.7tn or 21 per cent of global real estate value, just ahead of the US at $42.1tn.
Japan, the UK, India, Germany, France, Brazil, Italy and Russia round off the top 10, between them accounting for 28 per cent, or $56.8tn, of the global real estate asset total.

The article includes the following figure, corresponding to 2016. 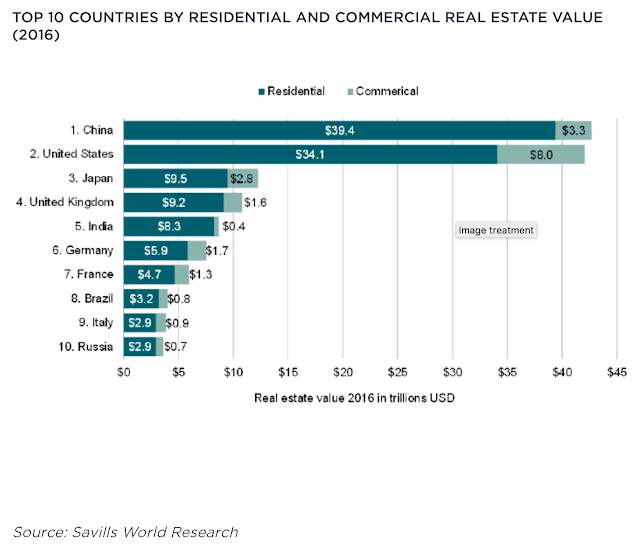 I've put the numbers in the following table, which is also available as a Google Sheet. 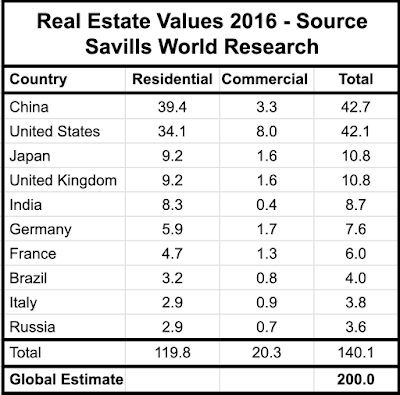 I note that the figures for France are less than the €10 trillion figure that I was using. So maybe even Savill's impressive numbers could be underestimates.
But those numbers are shooting up. At the end of 2017, Svill's estimate of the value of the world's real estate reached $280.6 trillion, up 6.2% in a single year.  (Actually, 280 trillion is 40% up on the number they gave for 2016. But I imagine that they are still getting to grips with the numbers). Their graph from 2018 shows that the value is considerably higher than the value of equities ($83.3 trillion), debt securities ($105.3 trillion), oil reserves ($114.1 trillion) or even gold ($7.6 trillion). 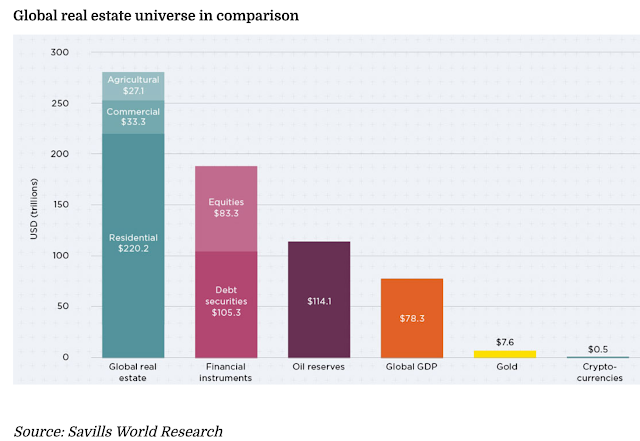 The fact that real estate values are going up by 6.2% a year (possibly more now - I haven't seen the numbers for 2018-2020), makes it even more obvious that my proposal of applying a 1% universal tax should not be a problem. If you own property, you can be very confident that its value will increase by far more than the amount you will be asked to pay. Indeed, this is likely to remain true until we get rid of the current absurd system where commercial banks can create essentially unlimited amounts of "money" when they make loans to people buying property.

The incredible increases in the value of real estate are clearly one of the principle reasons for the massive increases in inequality that we have seen in recent years. People with no real estate get nothing. Those who own thousands of acres and dozens of properties just need to sit back and see their wealth go through the roof. For this reason, it is very difficult to argue that a 1% tax, half the target rate of inflation for central banks like the ECB, could be seen as unfair.

Despite the obvious good sense of applying such a tax globally,  I realize that it may be tricky to get global agreement on this. But my suggestion is that the United Nations could ensure that any individuals, trusts, or corporations owning real estate in countries where the 1% tax was not implemented would have to pay their share directly to the United Nations. At a stroke, this would total demolish the tax haven problem. It would no longer matter where you located the trust that owned your property, you would still have to pay the 1%.

The UN would then be able to allocate those funds to any of its vital global operations. For info, there are 19 of them, but for me, the most deserving for a share of the $2.8 trillion would be:
Personally, I could quite easily imagine creating additional UN agencies for dealing with specific problems such as Climate Change and indeed any of the UN's 17 sustanaible development goals.

Just about everyone is happy to sign up for those 17 objectives. The only thing needed is the funding to make them happen. A universal 1% asset tax would be one very effective way to get there.