EUREKA - A universal 1% tax on all assets

A couple of days ago I posted a piece about recent French efforts to make proposals for the post-pandemic world. In it I mentioned my specific proposal for an annual 1% tax on the value of all real estate assets. With the estimated value of property in France at €10 trillion, such a tax would raise a very useful €100 billion a year.

While I was thinking about such a scheme, it occurred to me  that the same idea could be extended to cover not just real estate, but to all assets - no exceptions. And that's why yesterday I had a look at the Forbes Global 2000 list, which shows that the total assets held by those 2000 companies amounts to over $201 trillion.
Imagine what it would mean if the 1% annual tax on assets applied to that sum as well. It would generate up to $2 trillion in revenue every year. You  could do a lot of very useful things with that much money. OK, it's not enough to provide a basic income at 50% of median revenue for everyone on the planet - that would require around $10.6 trillion a year. But it's what would be needed to save the planet by tacking climate change. According to Morgan Stanley, this will need around $50 trillion between now and 2050.
That's less than $2 trillion a year, an amount that could be provided by a 1% tax on the assets of just the 2000 largest companies and corporations in the world. Would it be worth it? I believe so.
But what I like about the idea of imposing a universal 1% annual tax on all assets is that it could be implemented in a totally fair way. The tax would be applied to absolutely any entity that possesses assets. This would include me - because I'm lucky enough to own my own house. But it would also apply to anyone who owns land, even when there was no accommodation - the owners of agricultural land, forests, lakes etc. This would include property owned by companies of course. But, very importantly, it would apply to assets held by a trust. The use of trusts is one of the most widely used methods for avoiding tax, a point that has been very well documented by Nicholas Shaxson in his excellent book "The Financial Curse - how global finance is making us all poorer".  I've not been able to find any figures for the total amount of assets held by trusts, but it is likely to be a very large sum.
Since I live in France, I am particularly interested in thinking about how such a universal tax on assets would work in my own country. I've already mentioned the €10 trillion value property in France, that would generate around €100 billion a year.
Let's now add in the assets held by the 57 largest French based companies, based on the data from Forbes, that you can find here. 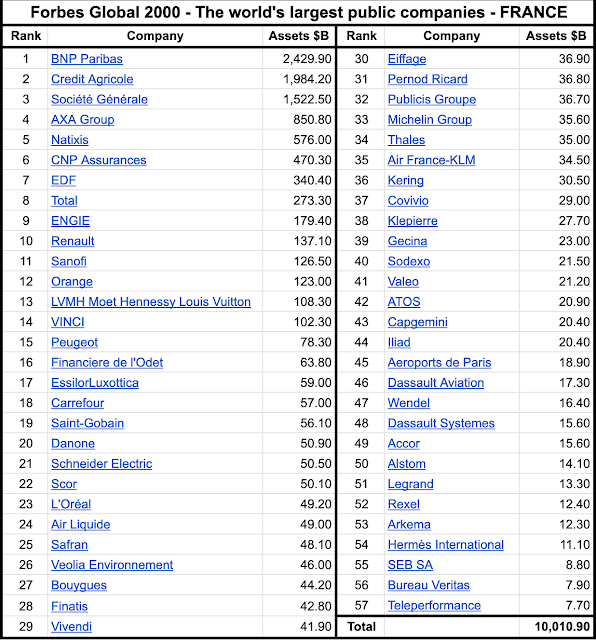 You can see that, as for real estate assets, the 57 French companies in the Forbes 2000 list would add a further $10 trillion to the assets that could be subject to the tax. At a rate of 1%, this would allow the state to raise an additional $100 billion - roughly €92 billion.
Of course, I can imagine that the boards of these 57 companies would not be at all happy if they were told that they were going to be asked to contribute €92 billion. But it should be born in mind that the CAC40 (i.e. the 40 most significant French companies) will this year pay out no less than €54.2 billion in dividends to their shareholders. They are apparently not that short of cash.
It's also interesting to compare these numbers with the amount of revenue raised via taxes on companies. In 2018, the French government raised €65.3 billion from taxes on company profits. If you offered companies a choice between taxing their profits, or taxing their assets, what would they choose? For me, it seems likely that a highly predictable tax on assets could be much better than a much more complex tax on company profits. Of course, it is clear that some multinationals are very well practiced at using devious schemes to reduce their overall tax liabilities - including the use of different tax jurisdictions to reduce the level of tax. But such schemes are much less easy to operate for companies that are based entirely within one country. For these reasons, it might be a major advantage to switch to an assets-based taxation scheme.
I can also imagine that the Banks, who hold trillions of dollars worth of assets, will complain that if they were forced to pay 1% of the value of those assets every year, this would increase costs for borrowers. This may indeed be the case. Currently, Banks in France are offering loans to people purchasing property at unheard of fixed rates that can be as low as 0.86% per year over 25 years (not including insurance). This is way below the European Central Banks target inflation rate of 2%. It really doesn't seem to make sense that Banks should do this. But of course, when you realize that the banks who make such loans don't actually have the money that they lend - they literally create the money out of thin air when they make the loan - it seems somewhat less incomprehensible.
But this means that, even if the banks were to pass on the 1% asset tax to borrowers, it would hardly be the end of the world. It might increase the interest rate from 0.86% to 1.86% - still below target inflation.
Perhaps a bigger problem with the idea of slapping a 1% universal tax on all assets is that, if one country were to try and impose such a tax (France, for example), companies could simply shift their location to a place where there was no asset tax.
I see at least two solutions to this problem. First, the introduction of the asset tax could be associated with the abolition of other taxes, including taxes on company profits. I have already made a similar argument for the introduction of a minimal tax on financial transactions. A country that decided to scrap taxes on profits and replace the tax with a financial transaction tax could well see the opposite effect - companies swarming to install their head offices in a place where the tax situation was much simpler and easy to control. Exactly the same thing could apply in the case of an asset-based tax. For the CEO of a company who wanted to reduce the asset-tax burden, the calculation could be fairly simple. Just sell off some of the companies assets, and use the money for investment, paying salaries, or even paying dividends - you will save 1% of the asset price every year.
A second option would be to organise the introduction of the 1% asset tax at a global level. A structure such as the IMF or United Nations could potentially decide to impose such an asset tax at the global level - on all corporations, trusts and individuals. The amount could be fixed at 1%, even for businesses registered in places with no asset tax. In such cases, the revenue raised could be used to directly tackle global challenges such as climate change,  the Covid-19 pandemic, or the next pandemic, whenever that will be. Companies that were already paying up to 1% in asset taxes in a given country would not have to pay.
In this way, there would be no advantage in relocating. The corporation would still pay exactly the same amount. the only difference is that, by localising in a country that imposed the asset-based tax locally, the company or corporation could preferentially help the local economy by opting for the locally based version.
Such a system could also be proposed for multinationals that have operations localised in several countries. The 1% asset tax could be split according to the percentage revenue in the different locations.
So, there you have it. Another example of a tax that affects everyone equally, but allows those with the largest wealth to make a greater contribution. Like the universal financial transaction tax that I proposed back in 2010 this universal asset tax has a number of really significant advantages.
Maybe the idea of a universal asset tax has been suggested before. But I've certainly not heard of such a scheme. Who knows. Maybe my blog post today could be the start of something really big. That would be nice....
Finally, I might note that this idea might have a better chance of success if we avoided the word "tax" completely. How about calling it a universal 1% asset-based contribution?
Posted by Simon Thorpe at 18:57