Forbes produces a list of the worlds 2000 largest public companies. based on 4 different metrics -  sales 2000, profits 2000, assets 2000, and market value 2000. They explain that each of the lists has a minimum cutoff value in order for a company to qualify: sales of $4.79 billion, profits of $323.2 million, assets of $11.63 billion and a market value of $5.27 billion. A company needs to qualify for at least one of the lists in order to be eligible for the final Global 2000 ranking. This year about 3,600 companies were needed to fill out the four lists of 2000, each company qualifying for at least one of the lists.

So, I thought it would be interesting to use the data to get a number for the total assets of those 2000 companies. I have compiled the data from all four lists in a Google Sheet that you can find here.

The results were eye-opening.The following table gives the number of top 2000 companies for each country, together with the total assets for the country. 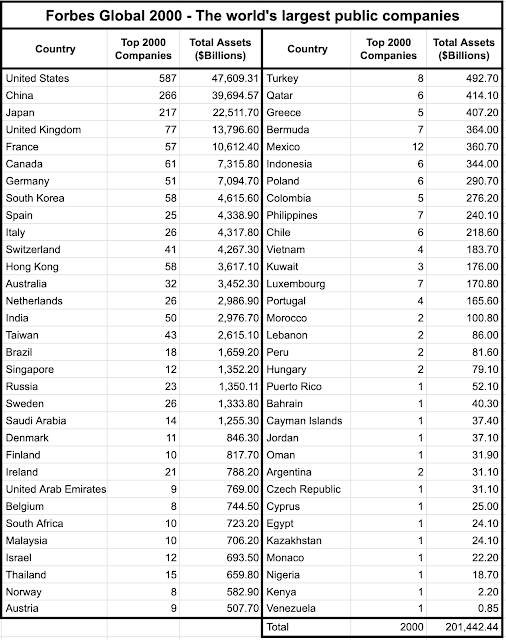 The bottom line total for total assets is $201,442 billion - over $201 trillion. The USA and China have the lion's share, with 23.6% and 19.7% respectively, followed by Japan (11.2%) and the UK (6.85%).
It's quite interesting to see that, with over $10.6 trillion in assets, French companies are actually substantially richer than those in Germany, with just $7 trillion.
It's interesting to compare that number to the total amount of global debt reported by the Institute for International Finance's Global Debt Monitor which reported that at the end of the Q1 2020, debt had reached €255 trillion. Given that Forbes own  data set includes a further 1600 companies that were not reported here, it seems plausible that quite a bit of that extra debt could also be held as assets by other companies.
So, what sorts of Public companies are we talking about? The following table lists the top 100 companies in terms of assets, that together hold well over half the total. 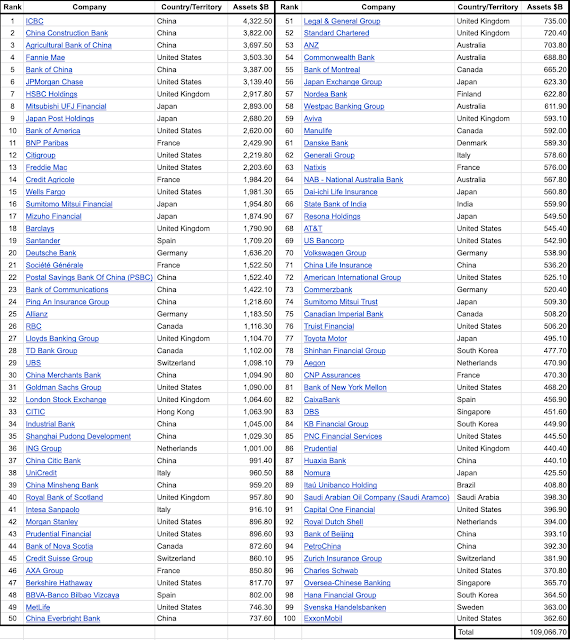 As you can see, the overwhelming majority of this top 100 are banks and insurance groups, with 4 of the top 5 being banks in China.  But you can find some non-financial companies such as AT&T (at #68), Volkswagen (#70), Royal Dutch Shell (#92) and ExxonMobil (#100). I was intrigued to find the London Stock Exchange at #32. Obviously, the percentage of non-banks increases as you go further down the list.
I will talk about the possible implications of this impressive data set in a separate blog.
Posted by Simon Thorpe at 10:05