Transactions in the UK : around £1760 trillion a year!

Sorry. I've been giving you the wrong numbers. I thought that transactions in the UK were around £1000 trillion. But I was wrong.

I have been piecing together the numbers over the last few weeks, but I hadn't got round to adding them to get the total for the UK. Here they are:

I've used figures for 2011 when available, or 2010 when necessary. This gives the following (converted into sterling at current rates when necessary). 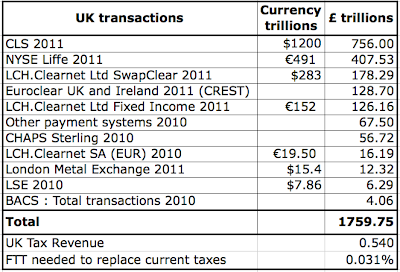 So, there you have it. Visible transactions in the UK add up to £1760 trillion!! Looks like my previous guess based on the BIS figures of £1000 trillion was just a slight underestimate. And I'm sure that there are plenty of other transactions in the "shadow banking" system that are not even listed here. In particular, I have not been able to find numbers for trading in Commodities by LCH.Clearnet Ltd which could well be very large.

With total tax revenue in the UK at around £540 billion (0.54 trillion), this means that ALL the current taxes could be scrapped and replaced by a single FTT of around 0.03%. It's simply because transactions exceed tax revenue by a ratio of over 3000:1.

Can the City really claim that an FTT of 0.03% would be excessive? It's a lot less than the 0.5% Stamp Duty on Share trading that has been in force since 1986. And don't forget that in return the banks would be able to turn UK into a legal tax haven - with no income tax, no corporation tax, no VAT.

Who in their right mind could say that a Financial Transaction Tax would not be a fantastic deal for the UK? Including for the banks...
Posted by Simon Thorpe at 08:45