My apologies to the large number of people who have been following my Economics Blog and who have had nothing new to read since the Brexit vote in June. Apparently, the fact that I haven't said anything has stopped people (or robots?) checking out my blog. Last month, there were 10,618 visits, bringing the total to a impressive 336,352 pageviews since I started the blog in October 2010 - six years ago.

But when I saw that the Bank for International Settlements (BIS) has published their Triennial surveys of activity in the foreign exchange and OTC (over the counter) interest rate derivatives markets for the month of April 2016, I thought it was time I broke my silence. After all, they only do this once every 3 years, the last one being in April 2013. 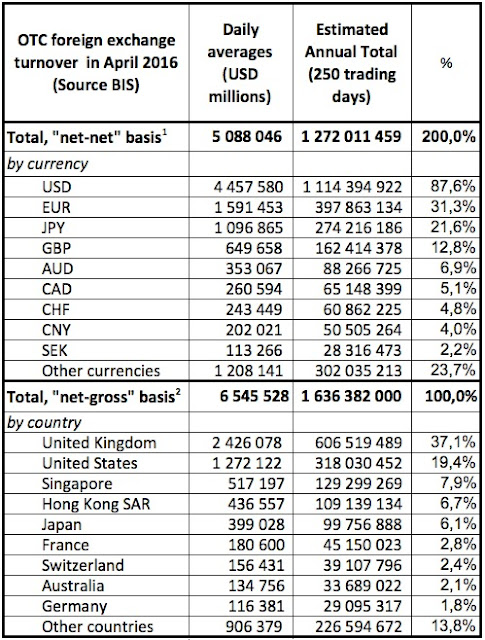 So, first lets look at the report on Foreign Exchange, which you download yourself here. You can also get an Excel file with all the numbers here. The bottom line is that there was an average of $5.1 trillion of foreign exchange per day. If you suppose that this level is typical, then we can estimate that in a year with 250 trading days, the total will be $1.275 quadrillion in a year. Here is a summary of the key numbers
A staggering 37.1% of this foreign activity goes through the UK's financial markets, nearly twice that in the next largest player, namely the US (19.4%).  Next come Singapore (7.9%), Hong Kong (6.7% ) and Japan (6.1%). Counties like  France (2.8%) and Germany (1.8%) are almost insignificant.

Those who know my blog will know that I have been arguing that it would be very sensible if governments and central banks  imposed a flat rate financial transaction tax on this sort of activity. Even a tax of only 0.3% on this would generate over $3.8 trillion in tax revenue - enough to scrap many of the taxes that the average citizen has to pay, including VAT and Income tax.

Obviously, no country is going to impose a tax locally, because the traders would simply move somewhere else. And that's why there is little chance of the UK imposing such a tax, despite the fact that with 37.1% of the $1.275 quadrillion occuring in the City - namely $473 trillion, it could be enough to avoid UK citizens paying tax at all.

It doesn't have to be a large tax. Obviously, it might be thought fair if the Central Banks charged the same "International Fees" imposed by the vast majority of Credit Card companies we people like you and I need to change from one currency to another. This figure, which is charged for multiplying the number in one currency by the current exchange rate  is typically between 2.5% and 2.75%. So if I pay a $100 restaurant bill in the USA with my French Euro Credit card, I get charged a 2.5% fee. That's very expensive for just doing a multiplication. A typical PC or Mac will do billions of such multiplications for second, with no labour costs whatsoever. And don't forget that this is in addition to the merchant fees of roughly 3% that you the shop or restaurant owner has to pay.

No, I don't insist on applying the number used by the commercial banks and credit card companies - that would be greedy! No, just a tenth of that would be fine, thanks. In the case of the European Central Bank, a 0.3% tax would generate over $1.4 trillion a year - roughly the amount of money that Mario Draghi pumps into the financial markets in the form of "Quantitative Easing". He could just give that money to Eurozone citizens in the form of an unconditional basic income, for example. That would get the economy going.
Posted by Simon Thorpe at 18:39