I've just been trying to digest the decision of voters in the UK to leave the European Union. The first point is that while England and Wales voted to leave, Scotland and Northern Ireland voted to stay. A breakup of the United Kingdom seems almost inevitable. Well done David Cameron - the UK prime minister who led to the end of the UK.

The Guardian has posted a fascinating set of graphs that show the demographic factors that are linked to the choice of voting leave or remain in different local authority areas. Here they are: 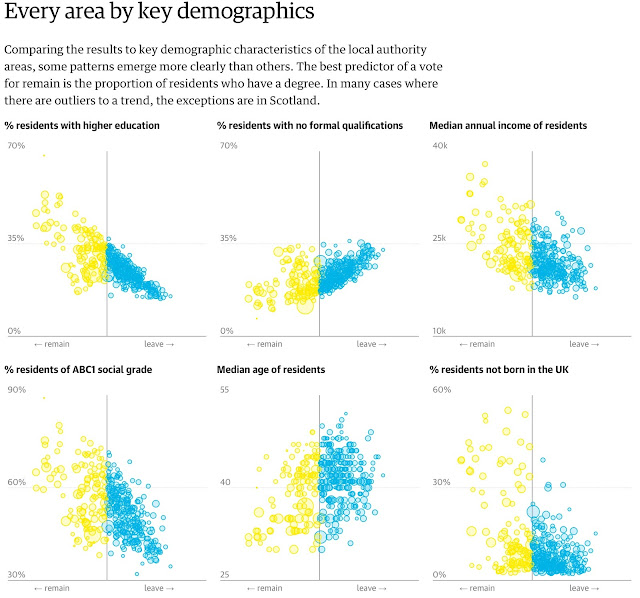 The relation between the proportion of people with higher education and voting choice is stunning. Rarely do you find such strong negative correlations.  The relation with the percentage of residents with no formal qualifications is also clear, as in the link with median income. Yes, there is a link with age - young people were more likely to vote remain. But the really strong links are with education and skills.

The message seems clear. This is the mass of the people telling the elites that they won't take anymore. They no longer believe the story that the politicians and the business lobbies are working for them. They don't believe that the European Commission, led by Jean-Claude Juncker, the guy involving in setting up tax systesm in Luxembourg that allowed multinationals to avoid paying their fair share. It's exactly the same phenomenon that has led Donald Trump to become the Republican candidate in the States.

What will happen now? Well, if nothing changes, the example set by UK voters will propagate across Europe. France could end up with Marine LePen as president next year and could end up leaving too. And of course, voters in countries like Greece, Spain and Portugal could easily also decide that they want out too.

But things could easily change. Suppose that Mario Draghi and the European Central Bank decided that rather than pumping €80 billion a month into the financial markets, they should simply put €240 euros into the pockets of every man, woman and child in the Eurozone. Would that change things? You bet. People would say that, yes, the European Union does care about the people. They don't only care about making the system work for big business, the multinationals. So, if the Brussels Technocrats want to stop the rot, there are ways they could change the course of events.

In the end, while I am incredibly worried about the implications of the UK's decision for both the UK and Europe, I see a  possible positive effect. It could be the start of the revolution that will change the entire economic system so that it works for the people - not just for the elites.
Posted by Simon Thorpe at 08:59