Isn't the BIS great? Not only is the Bank for International Settlements the place to go for the Triennial report on the levels of transactions in the Foreign Exchange and Interest Rate Derivatives markets (see my latest posts), it's also a place where I have been going for hard numbers on levels of transactions in 23 major countries. Their preliminary data for 2015 came out in September and, as usual, I downloaded the whole dataset so that I could get an idea of how transaction volumes have faired over the past year.

You can check out their webpage on "Statistics on payment, clearing and settlement systems in the CPMI countries" which has the preliminary data for 2015.

The full report (597 pages) can be found here but I find the Country Tables and Comparative tables  particularly informative, because they can be downloaded as Excel files - Country tables or Comparative tables.

I've been scrutinizing the BIS figures for several years now, and so I can see how total levels have changed over the years. Here's a table with the total value of Financial Transactions according to BIS since 2006. 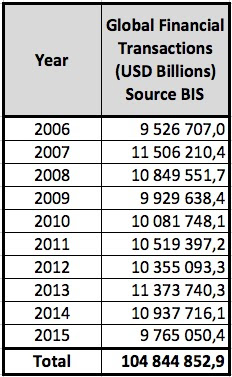 As you can see, the total value appears to have dropped back somewhat in 2015, down to about $9.8 quadrillion form $10.9 quadrillion in 2014. But it's still a very large numbers.

But I find it remarkable just how stable the numbers have been. Over the last 10 years, the value has fluctuated between a minimum of $9.5 quadrillion in 2006 to a maximum of $11.5 quadrillion the following year. The really impressive figure comes from the total over ten years - the number exceeds  $100 quadrillion. That's a 1 with 17 zeros after it.

For me, what is truly impressive is that all that frenetic financial activity is totally untaxed. When I spend money, I generally pay VAT at around 20%. And that is after I have already paid Income Tax. But the $100,000,000,000,000,000,000 that has churned through the financial markets has done so without anyone taking an interest at all.

I will also note that while the BIS's figures look impressive, they are notoriously underestimated. In many cases, their tables report that figures for particular players are "nav" (not available).  For example, the figures for a certain LCH Clearnet Ltd, which processed $1.58 quadrillion in transactions in 2007 have been "nav" since 2010.

BIS apparently doesn't know about the Options Clearing Corporation in the USA with handles more than 4 billion transactions a year (4,210,542,258 contracts in 2015 to be precise). It is quite possible that OCC alone could add a further $10 quadrillion to the figures provided by BIS.

But the bottom line is that, if ever any Central Bank decided to impose a Financial Transaction Tax on this activity, the revenue stream could be very impressive. And that revenue stream could be used to directly finance direct injections of money into the real economy - for example, by paying all citizens an Unconditioanal Basic Income. Remove money from the financial markets, and put it into peoples' pockets. Makes good sense to me.