The other fascinating information provided by Eurostat concerns the amount paid in Interest on Government debt.  It totaled over €198 billion for the European Union, with a few countries being particularly generous. French taxpayers handed over €34.5 billion, and those in Germany also contributed nearly €21 billion. But the most generous were Italian taxpayers, who paid out over €62.8 billion.

It's particularly impressive when you calculate the total amount of interest payments made since the Eurostat dataset started in 1995. For the 19 Eurozone countries, that total has now reached over €6.64 trillion, which constitutes over 87% of the increase in public sector debt over the same period.

I suppose that you might argue that since interests rates are low at the moment, we are getting a good deal. It's true that Eurozone interest payments have dropped a bit over recent years, as you can see from this graph. 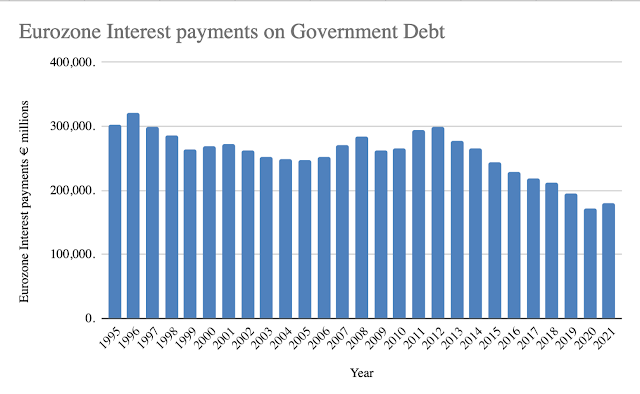 But €179 billion is not to be sniffed at. I suspect that there may be better things to do with that money.

I really think that fixing this system should be a very high priority.