The Bank for International Settlements published its most recent data set for Payments and Financial Infrastructures on the 7th December 2021. It includes data for 2020 for 27 countries and zones. You can check out the figures yourself here. But, as usual, I have compiled the data myself to get the overall figures for financial transactions, and you can see my calculations in a public google sheet here. 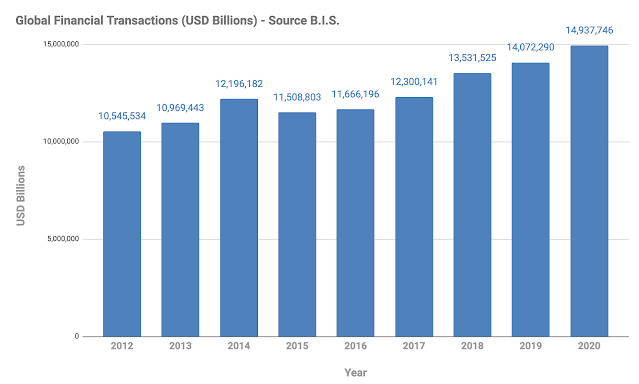 I have also broken down the total by country, as shown in the following table.

You can see that over a quarter of the total occured in the US, with the UK coming in second with around 13%, and China third with over 12%. The CLS group, which seems to avoid being localised anywhere in particular, accounted for over 10%.

In fact, the bulk of the total involves a relatively small number of players. The following table provides the details for 32 actors that each handled over $100 trillion in 2020. 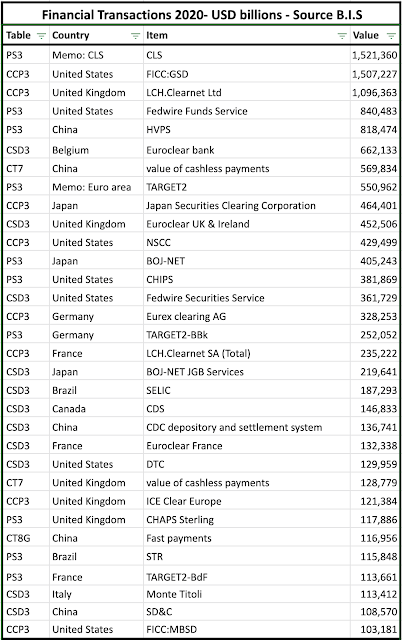 For me, this concentration means that, if ever there was a political will to use a financial transaction tax to raise the funds needed to do important things like saving the planet, it would be relatively simple to tap a substantial slice of the activity. Those 32 players account for 86% of the total.

Of course, as I have been pointing out every year when I have been compiling the BIS figures, the numbers provided here only cover a selective subset of the total. As the BIS site notes, Table PS3 provides information about  "Payments processed by selected payment system", Table CCP3 provides information about "Transactions cleared by selected central counterparties and clearing houses" and Table CSD3 provides information about "Transactions processed by selected central securities depositories". There is no explanation about how these selections have been made.  And there are some major omissions. One of the most glaring omissions is the Options Clearing Corporation - which describes itself as the "world's largest equity derivatives clearing organization". In 2020, it handled a staggering 7,525,503,088 trades in equity, non-equity, and stock loans - up over 50% on 2019. And already in 2021 they have handled over 9 billion trades - so it is going to be an even bigger year. Unfortunately, I have been unable to find any numbers concerning the value of these transactions.

When will BIS include OCC's data in their figures? How many other major players don't get included for obscure, probably historical reasons? Is $15 quadrillion just the tip of an iceberg?

Whatever the real figures, there can be little doubt that with $15 quadrillion a year in transactions, there is plenty of scope for raising money via a financial transaction tax if there is the political will. The other very interesting use for a tiny transaction tax would be to allow Central Banks such as the ECB, the Bank of England and the Fed to remove excess money from the system. This would be the perfect solution to allow central banks to inject newly created money directly into the economy without the fear of inflation. As I have argued, a minuscule FTT could be used to automatically remove excess liquidity in the system.