Saving the planet is going to require a lot of investment. Estimates vary a lot, but a report by Morgan Stanley in 2019 said that it would need around $50 trillion between now and 2050. And the UN's Gap Report in 2019 put the cost at between $1.6 and $3.8 trillion a year - which, over 30 years, would be an even larger amount.

It seems to me that a very high priority for the COP26 should be to come up with a figure that everyone can sign up to. But let's assume a minimum of €2 trillion a year to play safe.

How could this be avoided? For me, a simple solution would be to introduce new global taxes that are truly universal, and which are clearly ear-marked for solving the problem in hand. They would be implemented by a global authority, independently of national governments, and with the teeth needed to guarantee that everyone plays by the rules.

For some time, I have been proposing two such taxes that could be both used to generate the $2 trillion a year that we need.

The first would be a tiny Financial Transaction Tax that would be paid on all electronic transactions, wherever they occur on the planet. I've been following the Bank for International Settlements data for some time. In 2019, transactions totaled over $14 quadrillion ($14,077,730,000,000,000 to be more precise). How large a transaction tax would you need to generate $2 trillion a year? Answer - about 0.014%.

So, why aren't we doing it? Well, there are some very powerful people who consider that their ability to do trillions of dollars in transactions every day is somehow vital for the stability of the financial system. In 2016, traders were doing an average of $5.1 trillion a day on the foreign exchange markets, Why? Because they can make a profit doing it. It's possible that if a UN based global authority slapped a 0.014% charge on such transactions, they might do it a bit less - they would not be able to take home such a large bonus at the end of the year. But they would be able to look at themselves in the mirror and say that their speculative activity was doing a bit to help save the planet.

My second suggestion would be to finance the $2 trillion a year using a universal asset tax on all assets - wherever they are held, and irrespective of who owned those assets. It would not matter whether the assets belonged to a government, a company, a bank, a trust, or an individual. Every asset would be taxed, including land, buildings, yachts, jewelry, as well as any kind of financial assets including money and shares.  There would be no incentive to shift  from one sort of asset to another, because the tax would need to be paid anyway. Nor would it matter where those assets were held. Using a tax-haven would make no difference because the tax would be due every year anyway. Anyone involved in trying to hide assets to avoid paying the tax would be sent to prison.

How much would the annual asset tax have to be to generate the $2 trillion needed to save the planet? In 2020, I was suggesting that you might fix the tax rate at 1% per annum. But that number was partly justified by the idea that it would mean that someone living for 100 years, would still have a substantial amount left - removing 1% per year, for 100 years, leaves you with 36.6% of what you started with. But that's assuming that the value of the asset didn't increase. Given that global property values have been increasing by about 8% per year recently, I don't think we have to worry too much about those with assets, even with a 1% tax.

But in fact, 1% is probably way more than would be needed to generate $2 trillion. The property specialist Savill's recently published a report on total value of real estate in the world which "reached $326.5 trillion in 2020, a 5% increase on 2019 levels and a record high. Growth was driven by residential which is by far the largest real estate sector, accounting for 79% of all global real estate value.  It saw its value increase by 8% over the year, to some $258.5 trillion".

They have a fascinating graph showing that real estate is more valuable than global equities ($109.2 trillion) and Debt securities ($123.5 trillion) combined, and almost 4 times global GDP. 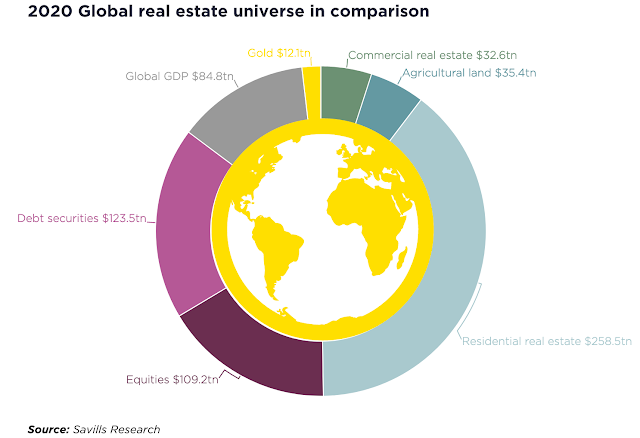 Adding up just real estate, debt securities, equity and gold produces a total of $571.3 trillion. You would not need to tax that at 1% to save the world - 0.35% would be enough. If you own a house or apartment worth €250,000, would you think that it would be excessive to pay €875 a year to save the planet? Of course, if you have a loan, you would only need to pay the tax on the part that you already own - the rest would  have to be paid by the bank that lent you the money.

But the figures provided by Savill's only covers a part of all the assets that could be taxed. If you own a yacht, or an aircraft, or a Picasso, or jewelry - you could simply be required to pay some proportion of its value per year.

Here, I am forced to guess, because I haven't been able to find the value of all insured goods. But, I suspect that total asset value could be closer to $1 quadrillion, which would shift the rate required to raise the necessary $2 trillion to 0.2%.

Finally, remember that my suggestion is that the authority could combine the two taxes. Splitting the tax take between the two would allow the FTT to be reduced to 0.007% and the asset tax to 0.1%.

Is that too much to pay to save the planet? I don't think so....

One big advantage of my proposal is that by fixing the amount needed at some value - here I have chosen $2 trillion a year - and announcing that the tax rates for the FTT and asset tax will be fixed to provide just the amount needed and not more, everyone who is required to pay will know precisely where their money is going. And, in addition, there will be massive pressure on the cheats to play by the rules. Since everyone except the cheats is contributing (according to their means), it is in the interests of everyone to find anyone who is trying to get round the rules and report them. The people who currently use tax-dodges and tax-havens to hide their money will hopefully soon abide by the same rules as the rest of the population.

Will it work? Well, the first step is to convince people at the COP26 meeting that this is the right way to go.