I've been examining in more detail the data set provided by the Bank for International Settlements that provides information on the level of transactions for the period 2012-2019. Today, I'm giving you  the breakdown by country for the whole period. 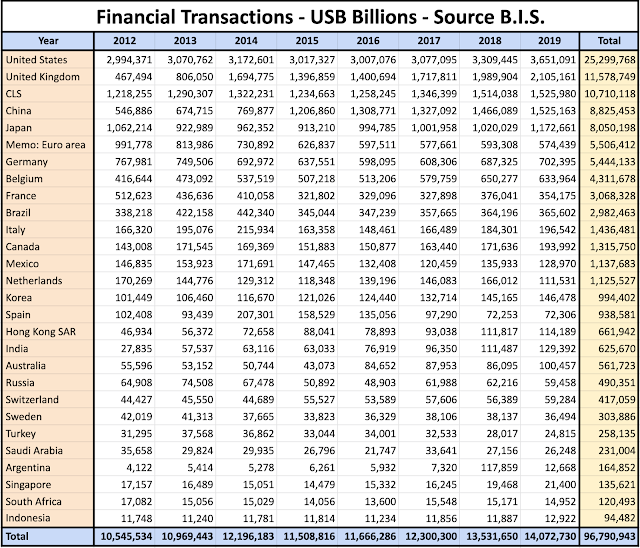 I've generated an additional column with the total transactions for each country for the 8 years, and ordered them according to that total. Not surprisingly, the USA comes top of the list a total of $25.3 quadrillion. Next comes the UK, but its interesting to see that the numbers for the UK have increased a lot from a modest $467 trillion in 2012, to over $2.1 trillion in 2019. China has also climbed fast from $547 trillion in 2012 to over $1.52 quadrillion last year. Other countries have been more stable, but France has actually dropped back a bit from over $512 trillion to 2012 to a mere $354 trillion last year.

I suspect that some of the numbers may be double counted. For example, BIS gives the data for CLS Group on a separate line marked "Memo". It may be that some of the trading is actually also included in the US or the UK figures. They also mark the numbers for the "Euro area" with "Memo", suggesting that those numbers may be double counted with other Eurozone countries. But I'm doing my best, and the BIS doesn't seem to be clear about how the tables are compiled.

If you want to try and analyse the BIS statistical data set yourself, you can find it here. But, I warn you, it's quite hard work!  To find out how I compiled the dataset, I you can find my Google Sheet analysis here. I've even made it so that you post comments on the sheet if you see anything that is unclear.

It's really rather a shame that nobody was listening when, 10 years ago, I proposed  that we could replace essentially all existing taxes by a very modest financial transaction tax. At a rate of 0.1% it could have generated getting on for $100 trillion in revenue. We could have fixed climate change, eliminated poverty and done all sorts of very desirable things.

Better late than never I suppose....