If you look at the Bank for International Settlements statistical dataset, you will see that you have a choice between a country by country analysis where the data is provided in National Country Units, or in comparative tables where all the numbers are converted to US dollars. You can see this distinction in this screen shot, which also shows when the data for 2019 became available. It was the 30th October. 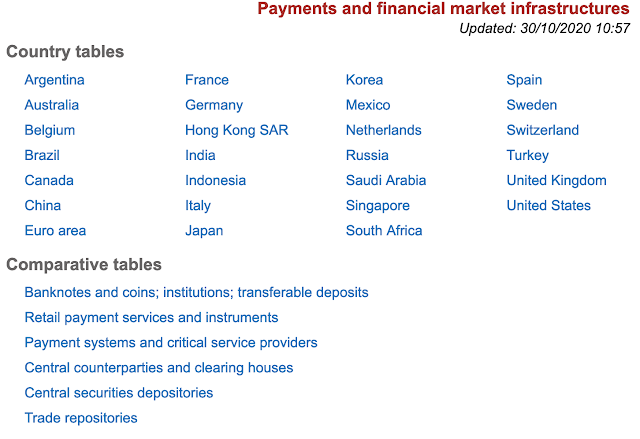 The data that I have been analyzing in the past few days has used the comparative tables. But it is also interesting to look at the country tables for the 27 different areas included in the B.I.S.'s dataset.  I've done this using a Google Sheet that you can find (and leave comments!) here. Essentially, I needed to use information from 4 different tables for each country. Here is the full set of tables.

I've compiled the key information in the following table which provides the numbers for each country for the 5 years from 2015-19 in National Currency Units such as Euros, Yen and Sterling. 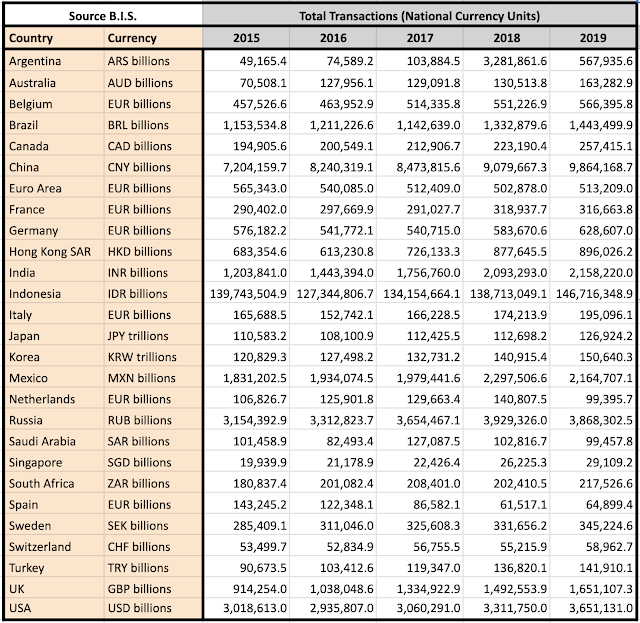 One of the advantages of presenting the figures in National Currency Units is that it makes the numbers more directly relevant for people in a particular country. One of the more impressive sets of numbers are the values for transactions in the UK that have increased from £914 trillion in 2015 to over £1,651 trillion in 2019.

I've checked that the numbers in the table are fairly close to the USD numbers that I reported recently (using the average exchange rate for converting the local currency into dollars for the year in question). But importantly, the total falls short of the USD value for the simple reason that none of the national figures includes the figures for CLS group.

It's particularly unfortunately that the need to include major international players like CLS Group is not taken more seriously. I have frequently pointed out the anomaly of not including the Options Clearing Corporation.