My proposed universal 1% tax on all assets should be able to raise very impressive amounts of revenue, using a simple and totally fair mechanism. One particularly attractive aspect of such a tax is that it would be remarkably simple to implement.

The fact is that the assets of all publicly listed corporations are provided every year as a legal requirement. By taking just the total assets of the Forbes Global list of the worlds 2000 largest companies, I had already obtained the impressive total of $201 trillion. But, according to Investopedia, approximately 630,000 companies are now traded publicly throughout the world. For some reason, this number is much larger than the figure provided by the World Bank (43,342 in 2018). Nevertheless, it is clear that there is a large reserve of wealth held by listed companies. If I had a team of researchers, I could plough through the annual reports of all those publicly listed companies to get a figure for the total tax take. 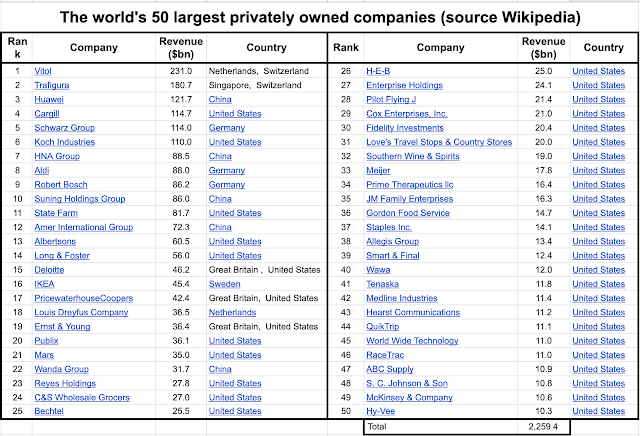 It seems to me that if you are a private company with revenues of tens of billions a year, you would have to be fairly badly managed if you did not manage to accumulate assets over the years. And in many cases, those companies have been around for a long time. The Wikipedia page also provides year in which the company was founded, and so it is easy to verify that Cargill, the largest privately owned company in the USA, has been around since 1865. Koch Industries was founded in 1940. Aldi, the German supermarket chain was founded in 1946. Bosch, in 1886, and so on. It's difficult to imagine that those companies do not have very impressive assets that could, and indeed should, be taxed at 1% a year if people like me do the same thing.

But that list of 50 companies is very incomplete. For example, Forbes has a list of the USA's top 228 privately owned companies, all of which have revenue of over $2 billion a year. But even those companies are just the tip of the iceberg. In the US alone, there are 7,375,023 privately owned companies, over 1.8 million of which have more than 50 employees. Actually, the total number may be way higher, since  in 2013, Forbes put the number of US based companies at 27 million.

So, what would be the number for the entire planet? I've not found any serious numbers, but in response to a question posed on Quora, one person suggested a figure of 115 million, while another said 295.2 million.

Accounting practices may vary quite a lot for privately held companies around the world, but in most places, companies are legally required to file accounts, and those accounts would presumably include the value of their assets. If so, it might not be impossible to get the relevant numbers. Getting the details would be tricky, unless a law was passed that obliged all companies to declare their assets, and pay 1% of the value of those assets every year - to the United Nations in situations where there was no asset based tax mechanism in place.

Of course, that's precisely what I am proposing.

It goes without saying that if ever the world's citizens were to realize that a 1% annual asset tax could be a simple solution to many of the worlds problems, there will be massive resistance from the extremely wealthy people who own those thousands and millions of private companies. They will use their political influence and ability to control the media to keep this simple idea out of the limelight.

But, in the end, since the proposal is simple, easy to implement, and above all absolutely fair, I think that it would be very hard to argue that the current system should be maintained. As I argued recently, the current system of taxing people's income, and reducing the ability of people to afford to buy the things they need to live decently by slapping VAT at 20%, massive taxes via social contributions etc makes no sense. The problem is that the system has clearly been designed to prevent the people, corporations and trusts that own the assets from ever having to pay their fair share.

We need to change that.
Posted by Simon Thorpe at 12:41