I've been going through more of the data provided by the ECB on its website. Yesterday, I came up with a number of €1,192 trillion using the data in provided by the ECB's Statistical Pocket Book. But it looks like those numbers don't include everything by any means.

If you go to the webpage called "Payments and securities trading, clearing and settlement", you will find several different sections. There is a section called "Payment instruments and large-value and retail payments systems" that I used to compile the numbers that I provided yesterday on Card payments, credit transfers, direct debits, e-money purchases and cheques.

There is a whole set of data on monthly statistics of payments instructions procesed by TARGET, which is short for "Trans-European Real-Time Gross Settlement Express Transfer System". The data is provided by month, but I have compiled the data so that you can see the transactions levels for 2010 and 2010 for each eurozone country. 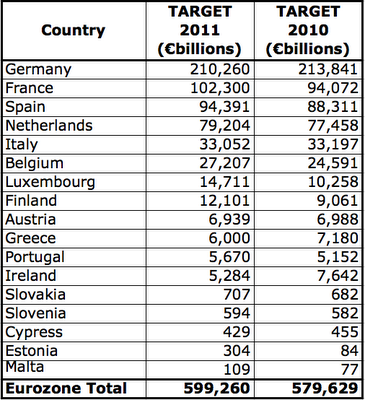 As you can see, the total of very nearly €600 trillion is somewhat smaller than the global number provided in the Statistical Pocket Book of €651 trillion, but the difference is that I specifically limited the total to the 17 eurozone countries. It's possible that the Pocket Book figure included the other non-Eurozone countries that also use the TARGET system.

But there is more. There is a page with information about "Securities trading, clearing and settlement", that provides three different sets of data.

First there are "Securities Trading Statistics" that you can get as a pdf file, or, if you are courageous, you can download the raw data. I did that and compiled the following table. 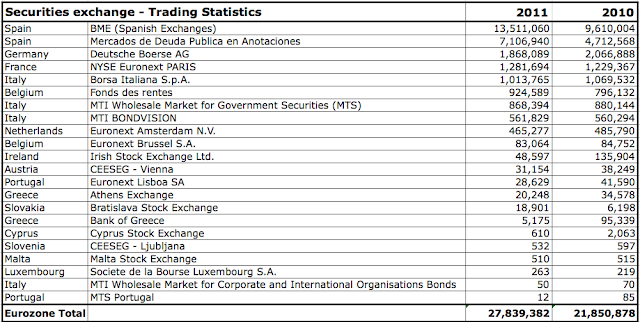 As you can see, there was a big jump to €27.9 trillion in 2011, up 27.4% on the previous year. Particularly intriguing is a massive 40% in trading on the Spanish exchanges. I have no idea what that means, although I'm pretty certain that it wasn't good news for the Spanish.

Second, there are "Securities Settlements Statistics" that you can again get as either a pdf file, or as the raw data. Again, I've done the hard work and compiled a table. 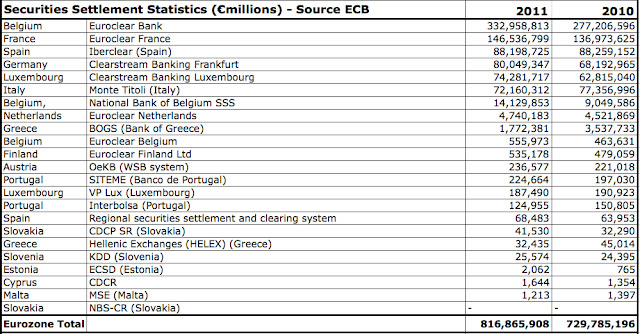 This table shows some really impressive numbers, totally nearly €817 trillion, with close on €333 trillion accounted for by Euroclear Bank in Belgium, with Euroclear France adding another €146 trillion. The numbers are up nearly 12% on 2010. Not much sign that Eurozone austerity has been hitting this sector of the economy.

Finally, there is a set of date called "Securities Clearing Statistics". The pdf is here and the raw data here. Again, I've compiled a table so that you can see where the big numbers are. 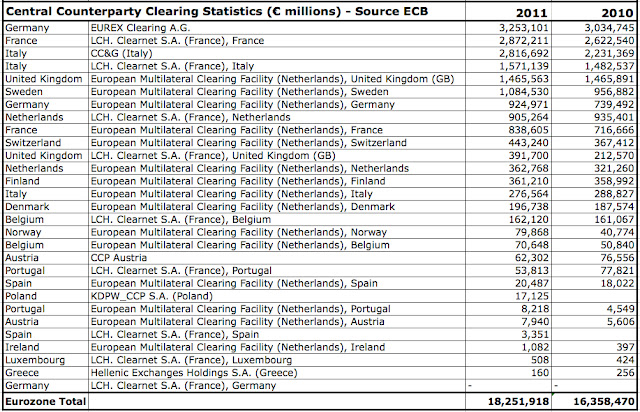 Again, we see a large 11.6% increase on 2011, with a total of €18.25 trillion.  Much of that involves  the European Multilateral Clearing Facility in the Netherlands, which, when you add up all the transactions it processed for the different Eurozone countries totals €6.14 trillion. The other really big player is LCH.Clearnet S.A. based in France. When you add all the transactions it handles for different countries you get a total of €5.95 trillion.

I'd just like to take the opportunity to, again, complain about the fact that LCH.Clearnet S.A.s big brother in London (LCH.Clearnet Ltd) has yet again failed to provide any numbers. The ECB obviously has the same problems as the Bank for International Settements, who have also been unable to compile numbers because of LCH.Clearnet Ltd's inability to hand over any figures for 2010 and 2010. Maybe they have something to hide?

By putting together all the numbers for the transactions that are provided by the ECB, I am in a position to provide what I believe is a fairly complete picture in the form of a summary table.

As you can see, total for 2011 has now reached an impressive €1,609 trillion. Let's call that a round €1.6 quadrillion. The number is pretty close to the value of €1.7 quadrillion I got using the B.I.S. figures last week. That's slightly odd, because the BIS figures were only based on 5 of the 17 eurozone countries - but they are the ones with the biggest economies, namely Germany, Belgium, France, Italy and the Netherlands.

Nevertheless, I think it is clear that the level of transactions only in the Eurozone are already extremely impressive - even without taking into account what goes on in the City of London.

So, here's a question for François Hollande, Angela Merkel, and the other EU government leaders who are pushing for the introduction of a financial transaction tax. Why is it that you never seem to talk about more a few tens of billions of revenue? If you take the ECB's own numbers, it is clear that with over €1.6 quadrillion in transactions within the Eurozone, the potential revenue that could be generated with a 0.1% Financial Transaction is huge. Just imagine what you could do with over €1 trillion. Hey, it would even pay for the €1 trillion that Mario Draghi has printed for the Banks since december last year.