The €1.6 quadrillion of Eurozone transactions - by country

Last week I compiled the numbers for financial transactions in the Eurozone in 2011 based on the latest figures from the ECB. The total was an impressive €1.6 quadrillion - up 8.4% on 2010 - proof if proof was needed that there is no lack of money in the Eurozone. And that was before Mario Draghi printed another €1 trillion for banks in the Eurozone to play with.

Today, I thought I would have a look at where the transactions were taking place. The table below gives the breakdown country by country. 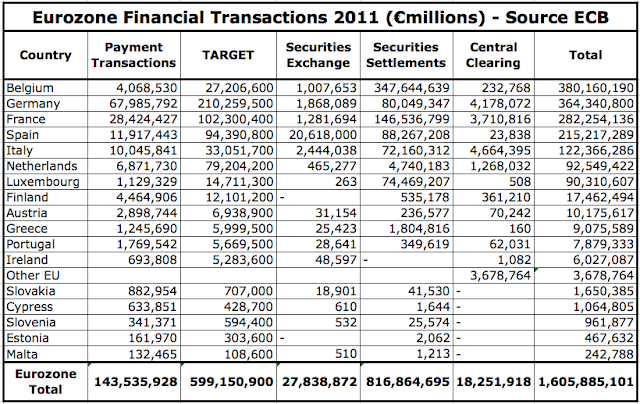 As you can see, Belgium comes top with a very impressive €380 trillion in transactions, thanks largely to the €333 trillion handled by Euroclear Bank which is based in Belgium. Next comes Germany, with over €364 trillion - again due in large part to a single component - the fact that over a third of all TARGET transactions are handled in Germany.

The big news in the last week is that there are now at least ten EU countries that are in favour of imposing a Financial Transaction Tax. The ten countries are Austria, Belgium, France, Germany, Greece, Italy, Portugal, Slovakia, Slovenia and Spain. And Estonia should be joining soon, as soon as the project has been ratified by the Estonian parliament. It's fantastic news. But there is one thing that I cannot understand. According to the best estimates, the tax will only raise a few tens of billions at most - despite involving most of the big players in the Eurozone. Essentially, only the Netherlands and Luxembourg will be seriously missed.

So how come, with €1.6 quadrillion in transactions, the FTT is only going to raise about €10 billion - equivalent to a tax of just 0.001%? It appears that the problem is that the tax is extremely selective - applied to just a small subset of transactions.

Why on earth are the Eurozone governments not planning to apply the tax universally?

The other big question concerns who would benefit from the introduction of such a tax. Clearly, if all the €1.6 quadrillion was subject to the tax, it would be absurd that Belgium should reap a huge benefit, simply because the Euroclear offices happen to be based in Belgium. So how should any revenue from such a tax be distributed?

I think there is a simple solution. And that is that all the revenue generated by the Eurozone FTT should be handed over to the ECB who would then distribute the money to each country as a function of population. Under such a scheme, a 0.1% universal FTT could generate something like €1 trillion in revenue. Of this,  roughly €250 billion would go to Germany (which has 24.6% of the population, €196 billion to France, €187 billion to Italy, €139 billion to Spain, €34 billion to Greece, €33 billion to Belgium, €32 to Portugal, €25 billion to Austria, €16 billion to Slovakia, €6 billion to Slovenia and €4 billion to Estonia. The Netherlands and Luxembourg would get nothing, unless, of course they decide to impose the FTT too.

Sounds like a pretty good deal to me.
Posted by Simon Thorpe at 16:40