My apologies to people who have been following my blog, because I have been extremely quiet for several months. Too many other things to do....

But I'm still here, and still convinced that entire financial system that controls the world in which we live needs a complete overhaul.

To give just one reason why the current system is totally unworkable, just take the latest figures on Global Debt from the Institute of International Finance. They have been producing a trimestrial Global Debt Monitor report since November 2015. According to a brief presentation that you can download from their site dated May 2018, it covers 72 countries/regions, and provides the following numbers of Total Debt including the financial section
In the latest edition of their  Global Debt Monitor from July 2018  they state that "Global debt rose by over $8 trillion in Q1 2018 to over $247 trillion (318% of GDP)".

Very frustratingly, the Institute for International Finance's full reports are only available to "Members". It's not enough to have an account with a login - I've created an account with them, but that's not enough.  No, to access the full reports, you have to belong to an organisation that is a Member of the IIF. Now, I am a Research Director at the CNRS - Centre National de la Recherche Scientifique - France's biggest public research organisation. It has 33,000 full time staff, 1144 laboratories, and a budget of €3.3 billion. But it turns out that the CNRS is not a member of the IIF, and so I have no way of getting hold of the full report. I suspect that the cost of membership is so high, that it's really only Banks and Financial Institutions that can afford it.

Enough moaning. Let's take the IIF's $247 trillion figure at face value. The question is, where is all this debt coming from? Who has a huge pile of trillions of dollars that they can lend out? Are we borrowing the money from some super rich person somewhere?

No. Even if you take the wealth of the 10 richest people on the planet, you only get a total of about $744 billion - not even a trillion. So, even if they were to lend out everything they own, you would not be able to explain how we can have so much debt.

So, what's the explanation?

For people who have been following my blog over the last 8 years, I hope you know the answer. Nobody had the money that was lent out.  It is just created out of thin air when commercial banks make loans. There is no fixed amount of money that can be lent. Money is just created by increasing the amount of global debt whenever a commercial bank can find someone prepared to take out a loan, and sign up to paying interest on that debt.

True, there has been a recent tendency of some Central Banks to commit the ultimate sin and create money out of thin air themselves - just like the commercial banks. They were not supposed to do that, because it made it glaringly obvious that money really can be created out of thin air. Contrary to David Cameron's claim, there is indeed such a thing as a "Magic Money Tree".

For example, the European Central Bank, under the leadership of ex-Goldman Sachs director Mario Draghi, has purchased a total of €2,532,098,000,000 (2.5 trillion) in assets since March 2015 using "money" that they didn't have. That succesfully made a lot of people very rich by boosting the markets. But the amount of credit generated by the ECB only accounts for a very small percentage of the $39 trillion increase in Global Debt that we have seen since 2015.

You can see this in this figure from the Insitute's Powerpoint presentation. 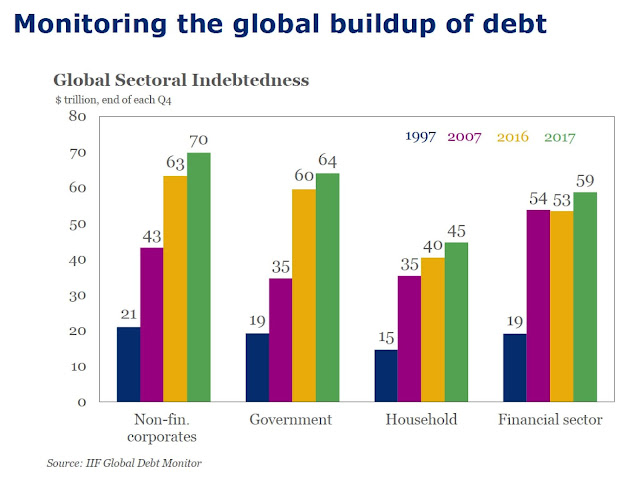 Thus, the financial sector has really succeeded in finding a bunch of suckers to take on their debt. This is particular obvious when you take the IIF's graph of debt as a percentage of GDP for Mature Markets (i.e. not the developing markets). Just look at how the financial sector's debt level dropped, while government debt soared. 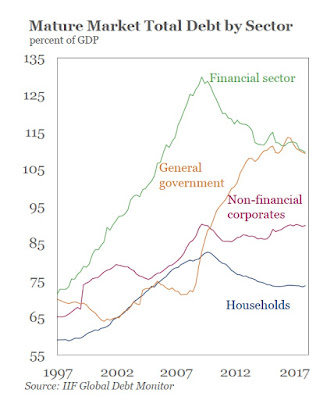 You can see just how well the banks managed to get Governments (read, tax payers) to pick up the tab. Very clever....

OK. So let's just take that figure of $247 trillion and consider what that means in terms of interest payments. Let's be generous and assume that the banks who managed to get corporations, governments and households to take on that debt, are only charging 2% interest on the loans. That's still around $5 trillion per year that is being moved to the people who have their hands on the debt creation machine. World GDP is currently about €75 trillion. So that means that at least 7% of the entire global economy gets siphoned off in interest payments.

In Europe, for example, our governments paid over €300 billion in interest payments in 2017
and total interest payments on public sector debt for the period 1995-2017 was over €7.8 trillion. Remakably, that figure is exactly the same number as the increase in debt over the same period. Yes, all the increase in European public sector debt was entirely used to pay interest. So much for governments spending too much on health, education, social services etc.

In the US, the latest figures show that taxpayers paid a staggering $523 billion in interest payments on public sector debt in fiscal year 2018.  The total paid since 1988 has reached over $11.2 trillion.

And with Trump cutting taxes for Corporations and the wealthy, the level of debt, which has already reached $21.5 trillion in September 2018, will continue to soar - and the interest payments will go up even more.

But the figure of 2% that I usedfor the interest rate, while reasonable for the current cost of government debt, is not realistic for the rest of the economy.  For example, if you borrow money using a credit card, you willl be lucky to pay less than 13% in the US, and if you are a student, you may get charged over 22%. But interest rates in the UK are particularly eye watering. Check out the list of cards here and you will learn that there are companies that will happily charge you 39.95%. In France, where I have the fortune of living, extortion like this is illegal - interest rates are limited currently to 3.73% per quarter.

But the rule is pretty simple. Banks will charge as much interest as they can get away with - it's their duty to their shareholders to maximise profits.

Does it have to be this way?

Actually no. I've been working on a scheme called IOUNet that I hope will mean that, someday, we will be able to live our lives without the banks "money". There will be no need to continuously pay interest to the banks that somehow succeeding in convincing us all that the only way to run an economy is using a debt based money system.

At that point, we could just ignore the €247 trillion of global debt. After all, once you realize that the whole thing is just a scam, all that debt will be seen as just pieces of paper - or rather, lots of zeros in some computer.