Today we will learn who will be the next French President. Hopefully, the "MacronLeaks" scandal will not have destablilised the campaign and we will avoid the trauma of having a neo-fascist like Marine LePen as president.

Nevertheless, I am far from being a fan of the very conventional neo-liberal program being offered by Emmanuel Macron. That's why I would like him to consider some of the more radical ideas that I have been pushing for the last 7 years on my blog.

In my "Open letter to Emmanuel Macron" last week, I was suggesting that he should consider replacing the bulk of the existing tax system with a flat rate universal tax on all electronic financial transactions. And I argued that the positive redistribution effect of the current inefficient income tax system could be done much more efficiently by simply providing a universal basic income to all citizens.

In earlier posts, I had already argued that such a basic income can be implemented very neatly by having what is effectively a negative income tax for anyone earning less than a certain amount. Using the distibution of incomes in France provided by Lansais, Piketty and Saez, I was able to show that if you had a basic income payment of €600 a month, coupled with a fixed income tax on all additional revenue of under 30%, the entire system would pay for itself. You can hopefully understand how this would work by looking at the following graph which shows how montly income varies with the percentile of the population. The blue line plots monthly revenue for French citizens by percentile. The yellow line gives the monthly income include the Basic Income and after income tax. And finally, the red line gives the net transfer - negative for those on relative low income levels, positive for those with higher revenues. If you want to see exactly how I get these numbers, feel free to check out the Google Sheet that has all the numbers here. 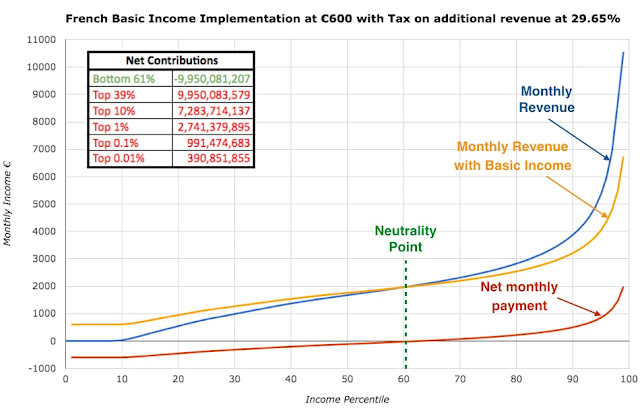 The idea illustrated in this particular example is that everyone gets an Unconditional Basic Income of €600 and then pays 29.65% tax on any additional revenue. Since the bottom 7% of the population have no income at all, they all get the basic €600. But the 61% of the population who earn less than about €2000 a month would all receive a net payment from the state. Someone earning €2000 would be neutral (no net monthly payment) because the €600 of Basic Income would be cancelled out by paying 30% tax on their €2000 of revenue. People earning more than €2000 would effectively pay roughly  30% tax on earnings above €2000. Thus, someone earning €3000 would pay €300 (i.e. an effective tax rate of 10%), someone earning €6000 would pay  roughly €1200 (an effective tax rate of 20%), and so forth.

It is interesting to point out that the €600 and 29.65% tax rate numbers are just one of a whole range of options. For example, if you only want to guarantee €400 of basic income per month, you could fix the tax rate at below 20% and again have a perfectly balanced redistributive tax system. In that case, €6.2 billion would be redistributed from the top 39% of earners to the bottom 61%, as shown in the following figure. 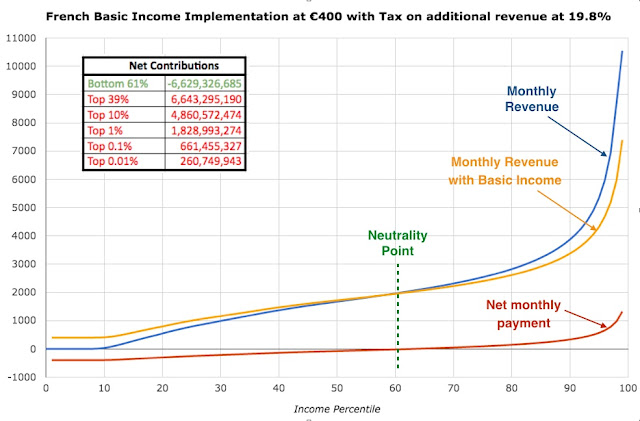 Likewise, suppose you wish to increase the basic income to €800. In that case, you would need to increase the flat rate tax rate to 39.95%, which would  transfer about €13.27 billion from the top 39% to the bottom 61% as shown in the figure. 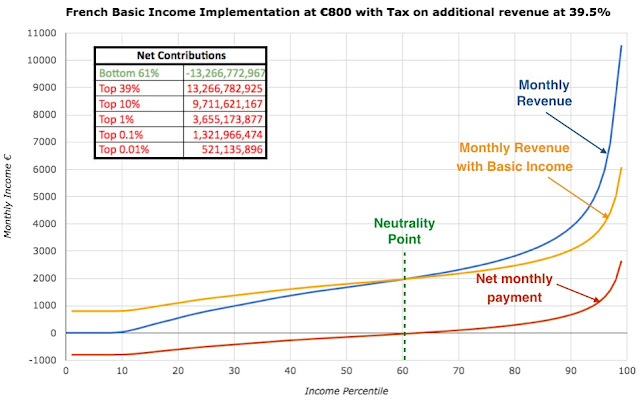 You want an even larger Basic Income? Easy. To get an Unconditional Basic Income of €1000 a month, you simply have to increase the flat rate tax to 49.5% and you will transfer nearly €16.6 billion from the most affluent 39% of the population to the other 61%. 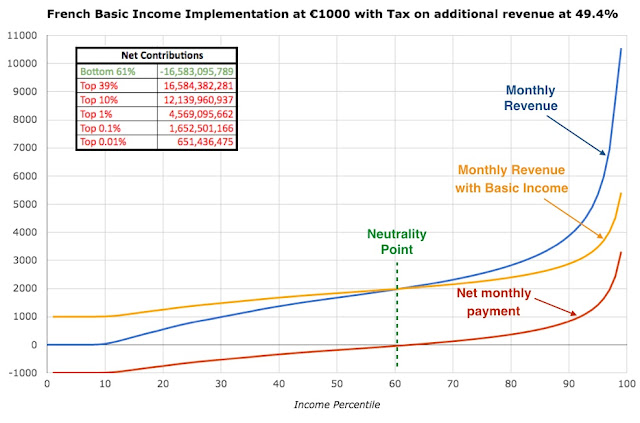 It's interesting to note that note that it doesn't matter which particular combination of Basic Income and Tax rates you choose, the percentage of the population that get a positive net payment stays fixed at 61%. Indeed the rule is pretty simple. Relative to a reference figure for the Basic Income of €600 and a tax rate at just under 30%, adding an extra €200 to the basic income requires a hike in the flat rate income tax of about 10%.

These numbers are built into the basic principle that the income tax system is designed as a redistribution system that shifts income from those who are earning a lot to those who are earning less than €2000 a month. If you actually wanted income tax to provide money to pay for other things (like the staggering €46 billion a year that French tax payers have been paying in interest on public sector debt since 1995!), then you could I suppose increase the tax rate above the levels proposed here. Personally, I object very strongly to the government using my income tax to pay illegitimate interest payments to commercial banks who didn't even have the "money" that they lent the French Government. In contrast, I would have much less problems if those interest payments were paid for using a tax on financial transactions - but that's another story.

If you do want to use this mechanism to actually raise money, rather than simply redistribute it, it's actual quite simple. If you go above the neutral tax rate for a given basic income level, each 10% increase in the tax rate generates roughly €120 billion in revenue. Thus, if we set the Basic Income at €600 and move the Tax rate from just under 30%, to 40%. First, it would generate €120 billion of extra income for the government. But second, it would move the point at which people start having to pay tax from €2000 a month, to about €1500 a month with the result that the percentage of people who receive money from the system will drop from 61% to 45%.

But for me, I really like the idea that Income Tax should serve one purpose, and one purpose only- namely redistributing wealth from the affluent to the less affluent. This may appear to go against my previous proposition that we could potentially scrap all taxes (including income tax) using a flat rate financial transaction tax. But the fact is that currently, French income tax only generates about about €146 billion a year, and most of that is in the form of the CSG (Contribution Sociale Generalisé) which is currently fixed at 15.5% and is not in the least bit progressive.

I think that people would be much happier with Income Tax if they knew exactly what it was being used for. Essentially, with my proposals, if you are among the 61% of all French citizens who earn less than about €2000 a month, your income tax will be NEGATIVE - it will be a good thing!  In other words the majority of French voters would actually be in favor of Income Tax!

And for those earning more than €2000, they will be able to feel proud that their taxes are going to help those with low incomes. If you are in the 1% of French citizens earning more than  about €11,000 a month, you will be able to look yourself in the mirror and not feel ashamed, because you are helping to contribute about 25% of the money needed to provide a basic income for all.

If you are in the 0.1% who earn more than about €32,500 a month, you will be even more proud to know that you among the group that finance no less than 10% of the basic income. And finally, if you count yourself among the 0.01% earning more than €110,000 a month, you will proudly be able to boast that your contributions pay for 4% of the basic income.

But for me, there are other huge advantages of scrapping the current ridiculous Income Tax system. My proposals are simple and easy to understand. No more tax bands. No more tax loopholes. Income tax will be simple to understand. Noone will need to spend their weekends trying to make sense of the ludicrously complex tables which you need to use to work out how much you should be paying in income tax. It will be simple. You will get a fixed allowance in the form of a basic income and then pay a flat rate on all additional income. Simple. Clean. And efficient.

At the same time, the existence of an Unconditional Basic Income at €400, €600, €800 or even €1000 a month would mean that most of the existing means tested benefits could be scrapped. You could potentially only keep benefits for people who are physically or mentally unable to earn additional income by working. Imagine the impact of such a vast reform?

Emmanuel Macron - are you listening? Isn't this the sort of liberalisation of the economy that you have been arguing for?
Posted by Simon Thorpe at 15:24