The other fascinating set data that has just been published on the Eurostat website concerns the Interest payments that were paid on the €12 trillion of public sector debt that had accumulated by the end of 2014. You may have read that interest rates are really good at the moment, and that Governments can borrow cheaply. But even if they are low, when you owe €12 trillion it still adds up.

Just how much can be seen from the following table that provides all the numbers provided by Eurostat (just click on the image to get a high-resolution version). The top half of the table provides figures for all the European Union countries, whereas at the bottom you can find the figures in millions of the national currencies for countries like the UK, Norway, Sweden and Denmark that have their own currencies. 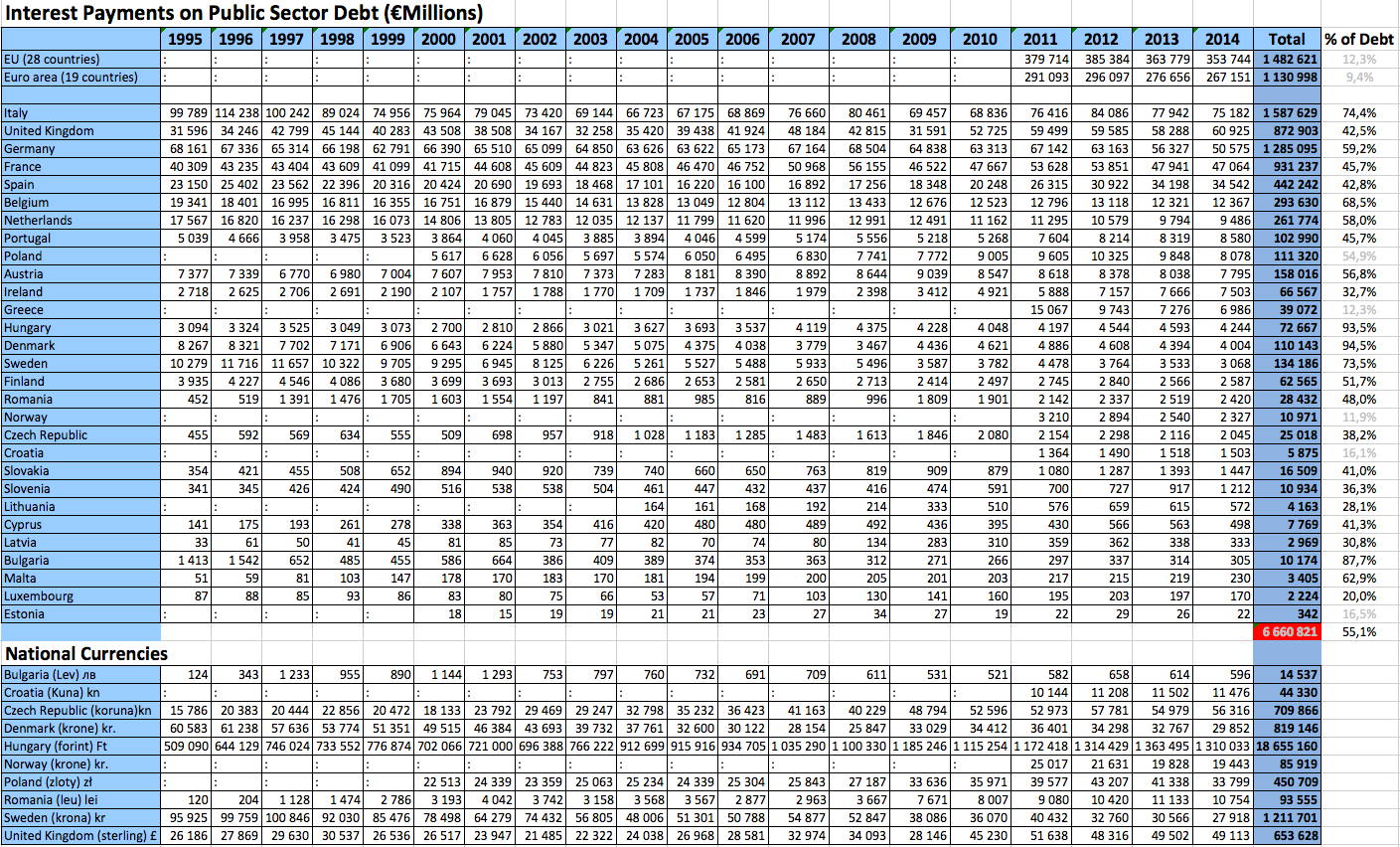 Here are some of the key things to note.

In 2014, European Union Taxpayers paid a total of nearly €354 billion in interest charges on public sector debt, bringing the total to nearly €1.5 trillion in just the four year period from 2011 through 2014.

The Eurostat table doesn't add up the interest payments for the full 20 year period from 1996-2015, so I did it for you. The numbers are not quite complete, because the complete set of figures are missing for Poland, Greece, Norway, Croatia and Estonia. But the total is nearly €6.66 trillion anyway (the number in red in the table). That's a whopping 55.1% of all the €12 trillion of European Union public sector debt.

Italian tax-payers were the most generous, paying out €75.2 billion in 2014 alone, and bringing their total for interest payments for the 20 year period from 1995-2014 to €1.59 trillion - which means that 74.4% of their total public sector debt (see my last post) is entirely due to interest payments. It also means that they paid nearly 24% of all the interest payments for the entire European Union over that 20 year period.  I imagine that Mario Draghi's ex-bosses at Goldman Sachs must be rubbing their hands together in glee. I think that they should give a personal vote of thanks to the Italian population.

The next most generous tax-payers are those in the United Kingdom. They forked out nearly €61 billion in interest payments in 2014 - that's over £49 billion sterling. And it brings the total amount of interest paid out by UK  taxpayers over 20 years to an impressive €873 billion - or nearly £654 billion. Not as generous as the Italians, but nevertheless around 42.5% of all the UK's public sector debt. Again, George Osborne's chums in the City must be smiling all their way to the bank (and all the way from the bank!). Remind me George - what is the reason for the size of UK public sector debt? Too much public spending, right? Indeed - too much public spending on interest charges!

Number 3 on the list is, would you believe Germany. They may be great at business and industry, but they are also very good at handing over taxpayers' money to bankers - over €50.5 billion in 2014 to be precise. That brings the total over the last 20 years to €1285 billion - over 59% of Germany's record beating €2170 billion in public sector debt, and over 19% of the European Community's total over the 20 year period.

As a French taxpayer, I've been doing my bit too. Along with all the other taxpayers in France, we paid a total of over €47 billion in interest last year, bringing the 20 year total to over €931 billion - 42.8% of the entire French public sector debt.

And so it goes on. I think that the bankers should give a special vote of thanks to tax-payers in Hungary and Denmark. In those two countries,  tax-payers made interest payments over the 20 year period that account for respectively 93.5% and 94.5% of all their public sector debts. At least in their case, it is clear where there taxes have been going.

It's maybe not the time to labour the point but, in case you didn't know, the banks that lend money to our governments don't actually have the money they lend. They just create it out of thin air, and then sit back and collect the interest. It's a truly remarkable system, and extremely lucrative for the commercial banks that have the monopoly on money creation. Sure, the European Central Bank has also started creating money out of thin air too - there will be over €1 trillion of quantitative easing over the next 18 months or so. But thanks to the remarkable well-constructed Article 123 of the Lisbon Treaty, Central Banks can't lend directly to governments. Instead, those governments are legally obliged to go and borrow from the commercial banks who, as I just said, all have money trees that they can use to generate unlimited amounts of debt for gullible, stupid or complicit politicians.

And there is no-one better to lend fictitious money to than complicit governments. If a bank lends to a business or to a consumer, there is a real chance that they might not get all their "money" back. In contrast, when a bank lends it "money" to a government like the Greek government, they can force that Government to extract the money needed to pay off those debts by taxing their citizens. It's virtually zero risk, and yet extremely lucrative. With the IMF and the ECB working in tandem, they have enormous power to oblige even reluctant governments (like the one in Greece) to pay their pound of flesh to the bankers - using their taxpayers money.

As I say, the fact that European Union's taxpayers have been extremely generous, providing €6.66 trillion of interest payments to the banking system. No doubt quite a lot of that money has been recycled back into the economy via the Maserati dealers and Lear jets. But is it really the best way to do things?
Posted by Simon Thorpe at 19:42