World Federation of Exchanges - over $2 quadrillion of derivatives in 2013

I was beginning to get worried that the Financial Markets were slowing down, and that soon there wouldn't be much left to tax with a Financial Transactions Tax. Fear not!

The World Federation of Exchanges just published a report saying that Exchage Traded Derivatives Trading Volumes recovered in 2013. Specifically, in 2013, 22 billion derivative contracts (12 billion futures and 10 billion options) were traded on exchanges worldwide – a 685 million increase above derivatives contracts traded in 2012. Sounds like there is still plenty of trading going on.

Actually, although the WFE says that their full report won't appear till May, I had a sneak preview by downloading the detailed data files from their site which provides an Annual Query Tool. This provides not just the numbers of contracts traded, but also their values in millions of US dollars. Here's what I found, by adding up all the separate files.
As you can see, the total is up 17.5% on 2012, to an impressive $2010 trillion. And that's despite the fact that the 2013 figures for some important players like the Chicago Board Options Exchange (which did over $35 trillion in 2012) are currently NA - not available. The Chicago Mercantile Exchange Group, which is the biggest of them all, is up 14%. But NYSE Euronext is up 33% and the Korea Exchange increased by 42% in a year. Impressive. 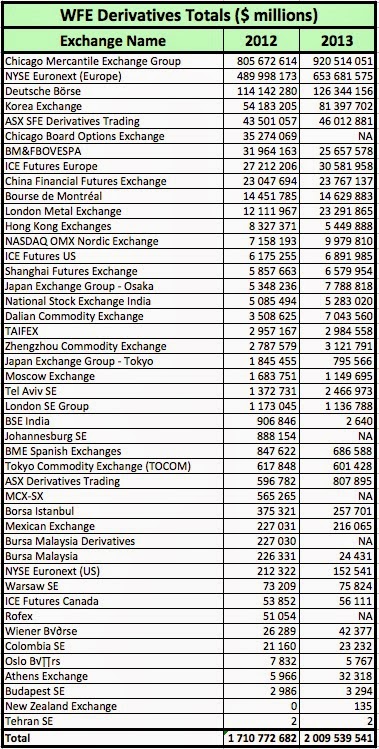 To get a clearer picture of where all this activity is concentrated, I have extracted the individual numbers for the three biggest players in the next table. 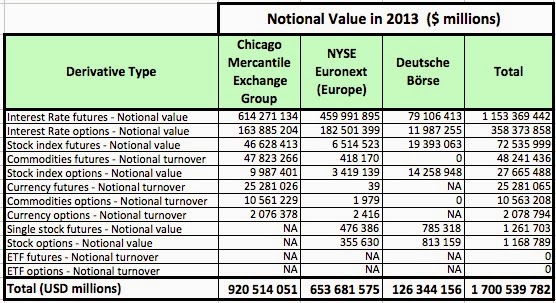 You can see that between them, those three players handled an impressive $1153 trillion in Interest Rate Futures alone. Perhaps some of the people who are involved in this frantic trading would like to explain to the rest of us what benefit society gets from this? Otherwise, I would say that imposing a modest 0.1% FTT on that would be a very sensible thing to do.
Posted by Simon Thorpe at 12:46