Now that the Bank of England has openly admitted that Commercial Banks create money out of thin air when they make loans - they lend money that they don't have - I thought it would be worth pointing out clearly what this means in the case of soveriegn debt.

You have probably heard the story that Commercial Banks are supposed to have a certain amount of capital to back up their loans. You often hear that Banks can only generate about 10 times as much in loans as they have deposits.

Well, this is quite clearly wrong.

Take a look at the 192 page document published by the Bank for International Settlements on "Minimum Capital Requirments".

Starting on page 19  you can find the details of how Credit Risk is calculated.

First we learn that there are two different systems in use.


"The Committee permits banks a choice between two broad methodologies for

calculating their capital requirements for credit risk. One alternative, the Standardised
Approach, will be to measure credit risk in a standardised manner, supported by external credit assessments

The other alternative, the Internal Ratings-based Approach, which is subject to the

explicit approval of the bank’s supervisor, would allow banks to use their internal rating
systems for credit risk."

Then we get to hear how how the standardised approach works. Here's a table showing how the risk weighting works for lending to governments.

Yes, you have read that correctly. When a Government has a rating between AAA and AA-, the risk weighting is 0%. Here is a map of Standard & Poors credit ratings for European Countries (you can find similar graphs for Fitch's and Moody's. 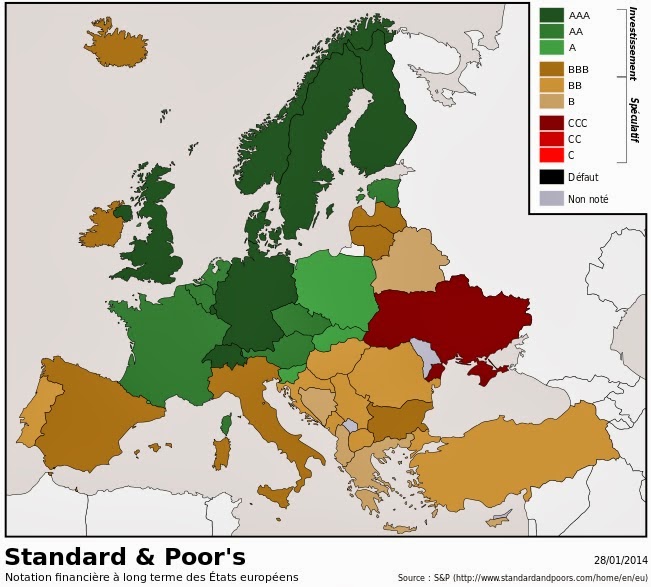 So, if you are in countries like the UK, France, Germany, Belgium, the Netherlands, Switzerland, Austria, Norway, Sweden, Finland and Denmark, commercial banks can create unlimited amounts of "money" to make their loans - WITH NO CAPITAL REQUIREMENTS AT ALL.

And then, those Banks can sit back and collect the interest on that loan made with non existent money. Those interest payments have cost a fortune - as you can see in the table I compiled last year.

Isn't this the most incredible racket you have ever heard of? By comparison, Mafia mobsters going round local shops and demanding money for "protection" is nothing.

Here we have the Banks lending unlimited amounts of inexistant money to governments with ZERO risk, and "earning" interest. And of course, if any government was to complain, they would soon pay for it by discovering that all of a sudden, their interest payments went up from a couple of percent, to 27% (like it did for Greece in 2012). As I say, the Mafia are small fry compared with this.

This has to stop. It cannot be justified.