Eurozone Debt : A detailed country by country analysis - Germany has no right to lecture anyone.

I'm still trying to come to terms with the fact that the total amount of debt in the 17 Eurozone countries is something like €24.5 trillion and yet the total money supply (M3) is only €9.77 trillion. In other words, there is 2.5 times as much debt as money to pay it off.

I'll have a look at the possible causes of this enormous gulf in another post, but for the moment, I thought I would have a look at the details of  precisely where the debt is.  I'm using the recently published ECB figures for public sector debt in 2012, and the BIS figures for private sector borrowing. The BIS figures are for the third quarter 2012, except for the figures that I show in red (Germany, Netherlands and Greece) for which the most recent figures are for the second quarter 2012. Unfortunatley, the BIS data set only includes household and business debt figures for 12 of the 17 Eurozone countries,  but they do also provide figures for the entire Eurozone, and so the figures in grey are estimates that I made on the basis of the population sizes of the 5 other countries (Slovakia, Slovenia, Estonia, Cypress and Malta). Have a look at the numbers in the following table, where I have ranked the main countires by the size of total debt. 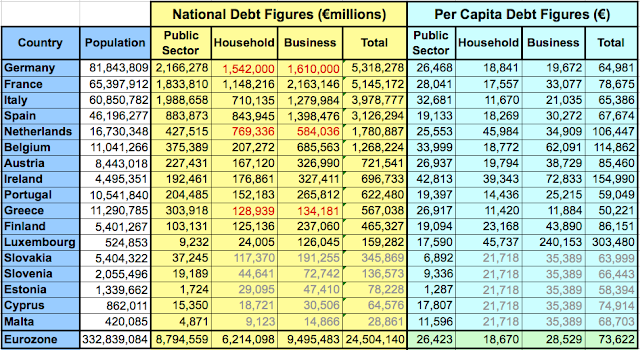 I've provided both the total debt numbers (yellow section) and per capita numbers (light blue section) so that you can see more easily how different countries compare.

The bottom line gives totals for the Eurozone (for the yellow section) and per capita averages (for the blue section).

I find it very intersting that Germany, which likes to lecture everyone in the eurozone about how only they know how to behave in a responsible way, is almost exactly at the average for per capita public sector debt (€26,400) and household debt (€18,700). OK, their business debts levels are a bit lower that the Eurozone average (€19,700 instead of €28,500), and so overall per capita debt is a bit less than the average.  Big deal, given how fantastic German industry is. If they are so wonderful, why is the German business community in debt to the tune of over €1.6 trillion?

But now look at Greece. Their per capita debt is only €50,200 compared with Germany's €65,000. Objectively, they are considerably more reasonable than the Germans. In fact, the debt kings of the Eurozone turn out to be Luxembourg (€303,000 per head), the Netherlands (€106,400 per head) and Belgium (€114,900). In fact, the only "badboy" country with above average per capita debt is Ireland (€155,000 per head). The other "criminally irresponsible" countries who are being hammered by the troika, namely, Greece, Spain, Portugal and Italy all have per capita debt that is below the Eurozone average!

When I see how these countries are being punished by German driven ECB austerity, I am appauled. Angela Merkel should be ashamed.

If I was German, and I realized just how much the ECB's refusal to do anything to fix the Eurozone crisis is the direct result of German intransigence, I think I would be ashamed too.

Of course, being British, I've also got plenty to be ashamed about. It is the UK government's intransigence in defending the interests of the City that is blocking other vital areas of banking reform. Cameron's cynical attempts to block the introduction of a financial transaction tax in 11 European countries is the height of hypocrisy, given that much of the UK's billions in stamp duty income comes from outside of the UK.

But it seems to me that the ECB holds the key to the Eurozone crisis. Given that there is a massive hole in the monetary system, it seems to me that a massive direct injection of debtfree money into the Eurozone is the best possible way of getting out of this mess. I've made some very clear proposals about how the €14.7 trillion of missing money could be distributed among the 17 eurozone countries, eliminating all public sector debt at a stroke.

Please Frau Merkel. Will you stop blocking the solutions. This analysis shows that when it comes to debt, Germany is absolutely not in a position to give lectures on how the rest of us should behave.
Posted by Simon Thorpe at 11:34