The need for monetary reform in France

I'm currently in contact with a number of people in France who believe that we really need something like the UK's Positive Money movement to press the case for monetary form. We are trying to put together the arguments needed to convince the French public and government that there are indeed alternatives to the current diet of austerity.

I'm also preparing for a talk that I will be giving next week in a meeting in Montbrun, a small town in the Ariege.

So, to start the ball rolling, lets just have a look at how the French national debt has increased over the past 35 years. 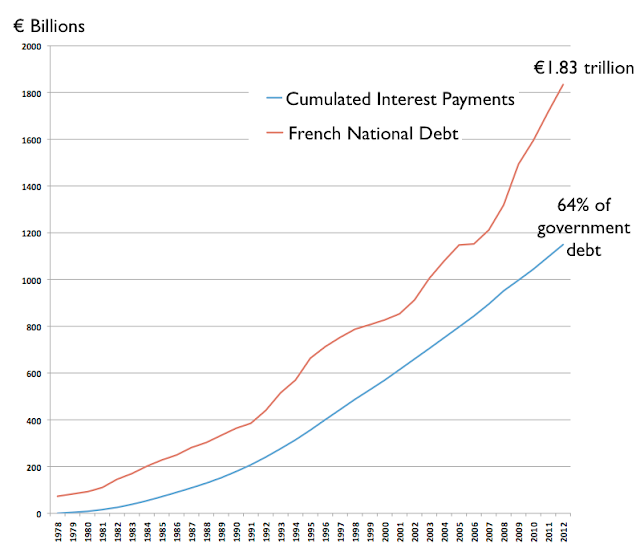 Well, the graph also shows the cumulated interest payments on government debt. As you can see, the total since 1978 has reached something like €1150 billion, i.e. around 64% of the total outstanding debt. Actually, the number could be €1400 billion, according to many authors, although I have not been able to find where that particular number comes from.

The important thing to realize is that the French government should not need to borrow money at all. If we had a sensible system, the French government would be able to obtain money free of interest from the Banque de France. Indeed, this was how things worked until 1973 when Pompidou and Giscard D'Estaign passed a law which effectively meant that the government would have to borrow from private banks (La loi du 3 janvier 1973). Could this have had anything to do with the fact that before becoming Président, Georges Pompidou had been the General Manager of the Rothschild bank?

Interestingly, the situation would have been a lot worse if the interest rates that the government had been paying had stayed at the levels that had been typical in the 80s and 90s. Here's one graph that I produced from Eurostat figures that goes back to 1993 and which shows that long-term interest rates reached a peak of 8.23% in January 1995. 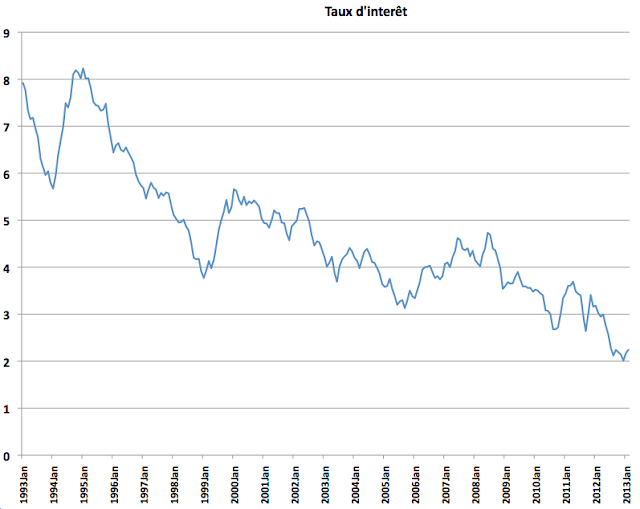 For the effective interest rates going back to 1978, have a look at this graph that I got from a report published in April 2010 called "Rapport sur la situation des finances publiques" by Paul Champsaur and Jean-Philippe Cotis. 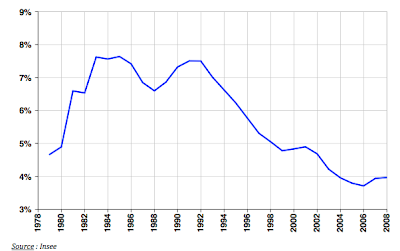 Here again, you can see that interest rates of between 7 and 8% were common throughout the 80s.

The important thing to realize is that when the commercial banks lend money to the French Government and then charge the French taxpayer interest on those loans (something that cost taxpayers €52.6 billion in 2011), they don't actually have the money they lend. They create the "money" out of thin air. This is because elected governments have handed the right to create (and destroy) the money supply to the commercial banks.  This is insane. Why should the French government borrow money from the banks and pay interest when money creation can be done with no interest by central banks?

Of course, the government isn't alone in having to borrow its money from the commercial banks. Businesses and households are also forced to borrow from those banks. And here again, the banks are happy to create the money out of thin air, and charge interest.

The latest BIS dataset provides the numbers for Private Sector debt, qnd distinguishes between Household debt and Non-financial Corporations (i.e. Business). Here's are the data since 1977 in graph form. 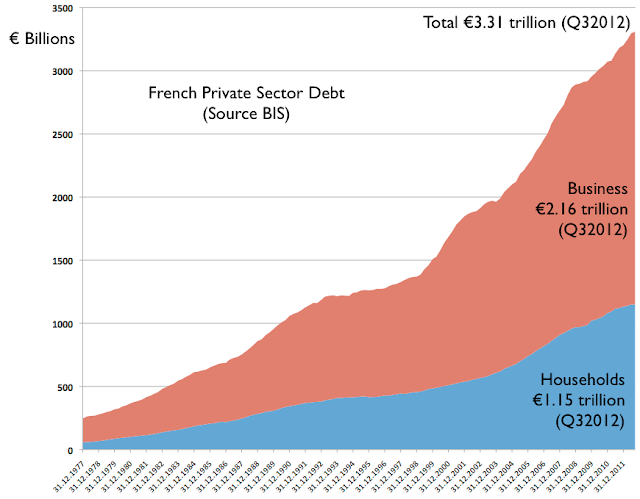 As you can see, the total has been skyrocketing, reaching €3.31 trillion at the end of the third quarter 2012. It's less easy to find out precisely how much the interest charges on that cost, but if we assume a figure of 5%, we can imagine that around €165 billion gets sucked out of the French economy every year in the form of interest payments.

And of course, we can add private sector debt to government debt to get a total of €5.13 trillion in debt, and a combined interest charge of something like €220 billion a year - about 8% of French GDP (which was €2.77 trillion in 2012).

Where do those interest charges go? Well, here's a graph that I got from the Agence France Trésor which shows that currently, about 64% of government debt is held by non-residents. In other words, the majority of those interest payments leave the country. Maybe they go to fill the $21 trillion in private accounts held in offshore tax havens? 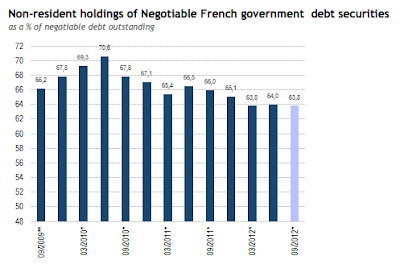 It is very clear to me that, like the UK, France needs a radical reform of its monetary system. Implementing the ideas proposed by Positive Money in the UK could be especially difficult to achieve in France, because any moves by the French government may well be blocked by the ECB and its president, Mario Draghi. As the ex-European director of Goldman Sachs, it is unlikely that he will be very keen on killing the proverbial goose that has been laying golden eggs for the banking system for decades.

But the moral case for change is overwhelming. And if the ECB and the Bundesbank block changes, there are alternatives. I have previously argued that the insane fractional reserve money creation machine could be turned on itself to cancel out public debt -see this piece from last year. Another alternative would be to introduce a parallel debt-free public money - the N-Euro.

Nevertheless, it is clear that the first step has to be to get the problem out in the open. The public has to be made aware that they have been the object of a massive scam. It has to stop.
Posted by Simon Thorpe at 17:38