How long has this been going on?

I'm still hoping that someone in the media will mention the Positive Money Conference on "Modernising Money" or the book with the same title that came out last week. Not a single mention anywhere. It's quite extraordinary. These guys have a serious proposal that I believe could fix most of the economic problems that we face.

What is going on?

Well, I think the secret lies in the fact that the current system, in which commercial banks get to create the money supply using fractional reserve banking, and then charge us all interest is such a great deal for those at the top, that discussing a reform of the system is completely taboo. Mainstream politicians, economists and journalists simply seem to be incapable of even mentioning the subject.

The scale of the problem is revealed by the amounts that the UK government (and hence the UK taxpayers) have been paying in interest charges for borrowing money that the Bank of England could having been creating with no interest to pay. This table (based on the numbers available from the Eurostat database) shows that  since 1995, UK taxpayers have generously handed over £495 billion in interest charges - an average of 2.6% of GDP - although the percentage actually reached 3.2% in 2011. I can't wait for the figures for 2012 to come out so that I can update the figures for all the 27 european countries. Something tells me that the numbers are going to be particularly impressive, especially for countries like Greece. 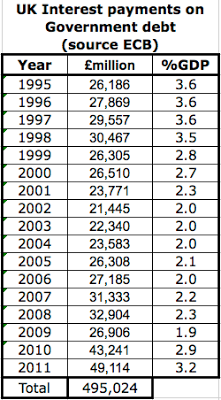 But it turns out that these numbers for the UK are relatively modest compared with the amounts that have been handed over in interest charges in the last 50 years. Thanks to Tejvan Pettinger's excellent "Economics Help" site, I found a document called "A Survey of Public Spending in the UK" published by the Economic and Social Research Council in 2009, that you can download here. On page 30 there is the following graph of "Public sector net debt interest payments as a share of national income from 1955. 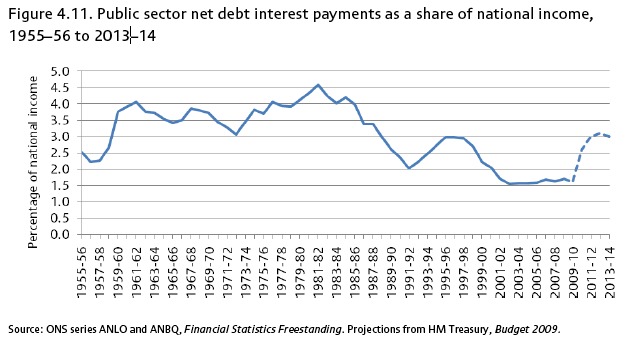 This may have seemed OK at the time. But now, the cat is out of the bag. We now realize that the whole idea that our governments have abandoned their natural right to create the money supply and given that right to commerical banks makes no sense whatsoever. It is quite simply the biggest con trick ever.

When I think of what governments could have done with the trillions in interest  charges that they have pointlessly been paying to the banking sector for all my life (I was born in 1956), I can only say one thing - this has to stop.

If there is a journalist out there reading this, can I ask you one thing? Please, please, give the people at Positive Money the coverage that they deserve.
Posted by Simon Thorpe at 18:42