How much money has been created by the banks?

How much much money have the banks been creating out of thin air? One way to find out is to look at the official figures for the money supply. Such figures are provided by the European Central Bank which provides numbers for what is known as M3. The numbers for the period 1970-1980 can be found here, and those since 1980 are here. I've put the two sets of numbers together to get a graph of the increase. Here's the result. 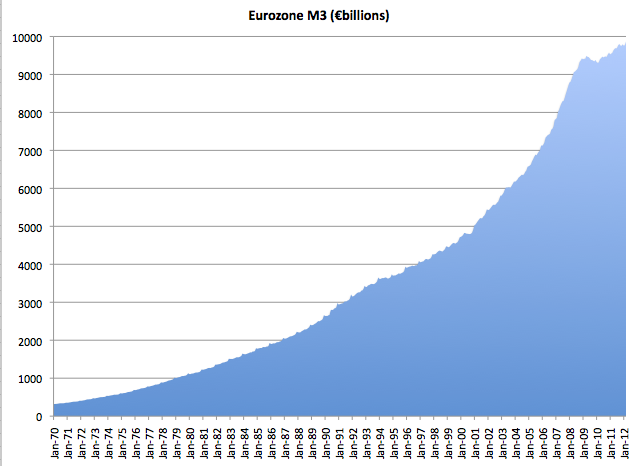 As you can see, the number has been ramping up very steeply, with a slope that was highest between 2005-8. At the latest count, we were standing at €9.87 trillion at the end of March 2012.

What I found particularly revealing is the comparison between the increase in M3 since 1995 (€6.17 trillion) and the amount of interest paid to the banks by Eurozone governments in the same period (€4.5 trillion). It would appear that virtually 75% of the money injected into the Eurozone by banks has ended up back with the banks. And that's just counting the interest payments paid by governments. I have no idea what the total amount of money paid in interest payments would be if we inlcuded the payments made by businesses and individuals.

It's a similar story in the UK. The Bank of England provides numbers for M4 (a slightly different measure to M3) since 1982 (see here). Again we can see that the number has been ramping up rapidly, reaching a peak of £2.21 trillion in April 2010 before dropping back slightly to its current value of £2.07 trillion in March 2012. Here's the graph. If you would like to know the values for M3 in the USA, then tough. For obscure reasons, the Federal Reserve decided to discontinue providing figures for M3 in March 2006. Apparently,  they considered that the cost of collecting the data wasn't worth the bother. Since then, we have heard about  the Federal Reserve secretly loaning $1200 billion to the banks at a very favorable rate of 0.01% interest. I suppose that could be a coincidence.

The next best figure for the USA, namely M2 (which doesn't include large time deposits, institutional money market mutual fund balances, deposits of eurodollars and repurchase agreements or repos) now stands at $9.9 trillion as of April 2012. I think we can safely assume that the full figure will be substantially higher since M3 in the Eurozone tends to be about 15% higher than M2.

When I think of the thousands of trillions of euros, dollars and pounds that have been created out of thin air by commercial banks over the past decade or so, I can't help thinking that the current economic crisis could have been avoided. If instead of allowing the commercial banks to create money with a single criterion, namely maximizing profits, we had used a system in which the money creation process was under the control of central banks and aimed at activities that provide benefits to citizens, then I am certain that the world would be a much better place.
Posted by Simon Thorpe at 16:21