A solution to the Greek debt crisis

I think I've really got a solution. And it brings together many of my favourite themes - the need for a restrictions on usuary, the need to reduce excessive debt, the need to introduce a Financial Transaction Tax amongst others.

I think it is absolutely obvious that the so-called Greek debt problem has less to do with the level of Greek debt, but more to do with the obscenely high interest rates that Greece is being charged on its government debt. As you can see from the data on the European Central Bank's website, in september the Greek government was being offered 17.78%! And it's probably gone even higher since then. The Greeks might just as well be using a Credit Card to borrow money. It's quite outrageous.

But, when you look at the actually amounts of external debt for 100 different countries  (external debt is total  public (government) and private debt owed to nonresidents repayable in internationally accepted currencies, goods, or services), you discover that Greece is way down at 16th in the table with $47,636 per person. This compares with Ireland where is it $503,914 per person, and the UK where it is $144,338. Greece is even behind France ($74,619) and Germany ($57,755). Portugal is also relatively modest ($46,795). It's not the Greek people who have been buying mountains of flat screen TVs, buying houses they can't afford, taking vacations on the never-never etc etc. And it is totally unfair that they are having to pay for this.

And even if we only take into account Government debt, Greece has still not got much to be ashamed of. As you can see from the table that I compiled with data from the Eurostat website, the biggest culprit for taking out huge levels of government loans is Germany which has over 2 trillion euros of government debt! 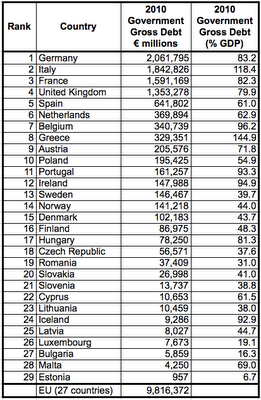 The problem for Greece is that, as a percentage of GDP, its level of government debt is considerably higher than a completely arbitrary "norm" imposed by the EU. It's currently 144.9%, but well, Germany is at 83.%. When a country goes over some arbitrary number, the ratings agencies downgrade, the interest rates go up, and Greece gets into a quagmire from which it will clearly never get out. Even if it stopped spending completely, sacked all the government workers, abolished pensions, closed the schools and hospitals etc etc, it would still be paying the 17.78% on its 329 billion euros of government debt to the banks.

So, what's my solution? Well, yesterday, the European Central Bank announced a reduction of it's key lending rate to 1.25%. Why not lend the Greeks the 329 billion they need to pay off all their government debt and then require them to pay it back over 10 years at an interest rate of 1.25%? Who will complain? Surely, not the banks, because they would immediately get back all the money they loaned (I won't bother going on about the fact that quite a lot of the money they loaned was money that they just created out of thin air - that 's another story).

Now, the really novel suggestion that I would like to make  is that the repayment mechanism should use a floating rate Financial Transaction Tax - an idea that I have suggested before. This is the idea that the rate of the FTT would be automatically readjusted to provide exactly the amount of revenue needed to pay back the 319 million euros over 10 years with a fixed interest rate of 1.25%. I haven't done the sums exactly, but this would be something like 35 billion euros a year.

What rate of FTT would be needed within Greece to generate 35 billion a year? Well, unfortunately, nobody seems to have any hard numbers on levels of transactions in the Greek economy (I know, isn't that ridiculous). But the Bank for International Settlements does provide numbers for Italy - which is a roughly similar (though larger) economy. When I added up the numbers a few weeks ago, I got a value of 193 trillion euros.  Italian GDP is 1549 billion euros, compared to Greece's 230 billion, so if we suppose that transactions roughly follow the same ratio, we would expect a total of about 28.6 trillion euros per year for Greece.

So, what FTT level would be needed to pay back the loan over 10 years at 35 billion a year?  Answer : 0.08% - less that the 0.1% that the EU is proposing to introduce across Europe anyway!

Once the repayment mechanism has been put it place, we will see just how much the level of transactions drops. Sure, there may be some speculative transactions that drop out, and it might be that the FTT level has to go up rapidly to keep generating the 35 billion a year (100 million a day). But how much could it go up? 0.5% maybe? That's the level of stamp duty paid on share transactions in the City of London. 1%? That's what banks charge for doing any international operation. 2-3%? That's what Credit Card companies like Visa, MasterCard and American Express charge clients. We are all perfectly used to being charged money to make transactions by banks. The only difference here is that the money goes to do something that is actually useful - paying the ECB the money it is owed.

Frankly, I'm confident that even if the FTT went up to 5 or even 10%, the Greeks would be happy to get out of the 17.78% interest rate scam that they currently have to suffer.

But even better is the fact that once the FTT mechanism has been introduced, the Greek government could increase the rate above that required to pay back the ECB loan. By doing this they could decide to completely eliminate income tax (which as we are all told is currently not paid by many Greeks anyway). They could also get rid of VAT, and taxes on Company profits. Hey, Greece could become the testing ground for my proposition that we should get rid of all taxes except a single flat rate transaction tax that would apply to absolutely all transactions.

Yep, I really think that this is the way to go. Will anyone back me up on this?