I've been going through the latest batch of Data from the Bank for International Settlements, and compiling all the figures to obtain a value for Financial Transactions in the global economy. The following table gives the numbers  by Country or Area.

The bottom line is that the total exceeds $14.9 quadrillion (where a quadrillion is a 1 with fifteen zeros after it). This figure is over 10% larger than the BIS totals fo 2017, as you can see from the following table that provides the figures for every year since 2012. 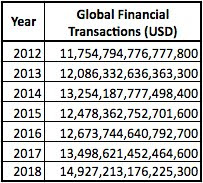 Actually, all these numbers are higher than my previous calculations. For example, a year ago, I had given a number of $12.35 quadrillion for 2017. And for 2016, I had reported $11 quadrillion. These differences appear to result from the fact that BIS seems to be including more sources, and it is updating the data progressively. My thanks to BIS for that.

The basic data for generating these figures come from a set of tables that you can find on BIS's website.

A few other tables provide some other figures. For example Table CT7 gives the value of cashless payments, and Table CT8 gives the same numbers, but broken down according to the type of instrument (Credit transfers, Direct Debits, Cheques, Card and e-money payments, and other instruments). Table CT11 gives the value of withdrawals and deposits.  But these tables all give values in millions of US dollars.
I've downloaded everything and done some fairly basic editing to get the numbers into shape by multiplying the numbers so that they were all in dollars. In some cases, the numbers for 2018 were missing, and in those cases I used the numbers for the most recent year.

You can find all the data in a publicly available  Google Sheet called BIS Transactions 2018.
The most important information is the list of 236 different items that make up the $14.9 quadrillion. It's particularly interesting to look at the big players - those that handle at least $100 trillion each, as shown in the following table. Note that the two figures in red are actually numbers from the previous year. 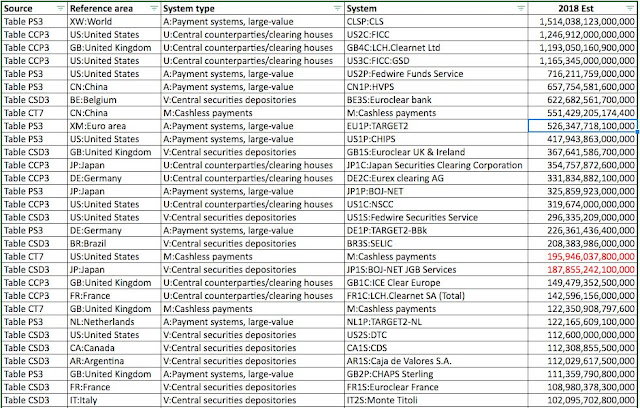 $14.9 quadrillion is clearly a very large number. But as I have repeatedly stressed, the BIS's are by no means complete. They say themselves that the numbers come from "selected payment systems (Table PS3)",  "selected central counterparties and clearing houses (Table CCP3)" and "selected central securities depositories (Table CSD3)". A particularly glaring omission is the failure of the BIS to provide any information concerning the Chicago-based OCC (Options Clearing Corportation) that cleared a staggering 5,242,089,870 contracts  (options and futures) in 2018. It describes itself as "the world's largest equity derivatives clearing organization", and yet BIS has no information about them at all.

Why am I so interested in these numbers? Well, I am convinced that if we want to save our planet we are going to need a lot of financial resources. Assume that we would need $1 trillion a year to completely transform our economies, replace fossil fuel energy sources and so forth. That sounds like a lot of money. But it is what would be generated by imposing a 0.01% Financial Transaction Tax on the $14.9 quadrillion in transactions listed by BIS.

Of course, the traders will tell us that the entire economy would collapse and the sky would fall in if they had to pay any such tax. But remember that the money could be pumped back into the economy by financing renewable energy, public transport, insulation etc etc. That's good for the economy anyway.

Would they run out of money? I doubt it. Firstly, remember that Mario Draghi effectively printed around €2.57 trillion and used it to pump up the financial markets in the space of 3 years as head of the European Central Bank. His financial stimulus could well explain at least some of the 10-14% annual increase in transactions that I have reported here. Imposing an FFT and using the revenue it generates to save our planet would be just claiming back some of that money.

But remember that the vast majority of the money being used for these quadrillions of dollars worth of transaction is effectively created out of thin air by bankers when they make loans. As I noted last year, Global Debt had already soared to $247 trillion, and it is expected to reach $255 trillion by he end of this year.
Much of this money creation is being used to drive the financial system and provide traders with their bonusses. Now, governments could be tempted to go out and borrow yet more money, and thus increase global debt even more. But surely, governments shouldn't need to borrow money at all. They have the ability to raises taxes. And taxing the $14.9 quadrillion in transasctions would be trivially simple. It would be a single line of code in the software that is used to do the transactions.

Posted by Simon Thorpe at 18:09 No comments: